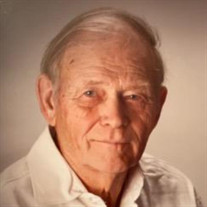 GODFREY – William R. Wilson, 92, passed away on Monday, March 30, 2020. He was known as “Dick” as a boy and to his family, and known as “Bill” as an adult. He was born in Chautauqua, Illinois on March 22, 1928. He grew up in Chautauqua and in Godfrey. He attended school in Elsah and high school in Jerseyville. He joined the United States Air Force in 1946 completing Radio Operator School at Scott Field (Scott Air Force Base) where he trained to be a Radio Operator 760, and was stationed in Colorado and England with the 3310th Assembly Squadron and the 3310th Airbase Group, with an Honorable Discharge in 1950. After the military, he worked for Laclede Steel Company in Alton in the Wire Mill retiring in approximately 1985. Following retirement from Laclede Steel he worked as a farmer until 2015. William R. “Bill” and Marcella (Sinclair) Wilson were married in 1959. She preceded him in death 2016. The couple had two children, Maggie of Grafton and Marcie of Dove Canyon, California, both surviving. Also surviving are his grandsons, Jesse Weller of Grafton, and Travis (Beth) Weller of Jerseyville. He is also survived by his two great-grandchildren, Gracie Weller and Claire Marcella Weller of Jerseyville, as well as several nieces and nephews in the Alton and Godfrey area. He was preceded in death by his parents, Walter T. and Martha “Edith” (Campbell) Wilson, as well as a brother Robert (Madie) Wilson of Godfrey, and a sister Delphene (Clyde Jr.) Wiseman of Godfrey. Bill was a devoted and caring family man who touched lives and made friends everywhere. He cared about the environment and had a lifelong love of farming and animals. A private Christian funeral service will be held at Gent Funeral Home in Alton on Monday, April 6, 2020; Deacon Bill Kessler will officiate. Unfortunately, the funeral is required to be private due to the COVID-19 pandemic. Burial will be at Valhalla Memorial Park in Godfrey. Memorials may be made to the Jersey County 4-H Foundation or the American Heart Association Local Chapter. Additional information and online guest book may be found at www.gentfuneralhome.com

The family of William R. Wilson created this Life Tributes page to make it easy to share your memories.

Send flowers to the Wilson family.