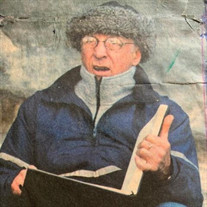 Dateline: Godfrey William Edward Whalen, 82, died on May 8, 2020 in Godfrey, IL.  Born February 8, 1938 in Alton, he was the son of Peter and Mary (Baker) Whalen.  Bill attended St. Ambrose Catholic School and Marquette High School, where he was known for his athletic talent in baseball and football, and for his skill as an artist, which led him to a B.F.A. in Painting from Washington University in 1961.  Following service in the U.S. Army, Bill moved to New York to pursue a career as an artist.  In 1971, he moved to Plainfield, Vermont, where he devoted himself to a life of painting and living close to nature, while showing his artwork in galleries in New England and California.  In 2006, following his marriage to Jeanne (Lemieux), his adored partner in all things, Bill returned to Godfrey.  Bill loved living, and outside of artwork, he expressed his boundless creative energy through a wide range of interests, including hiking, gardening, cycling, philosophy, Nordic skiing, and music.  His mother Mary was an accomplished pianist and organist; early exposure to her performances instilled a life-long love of classical and baroque music in Bill.  He was also a careful reader of H.D. Thoreau, and posted a handcrafted sign in his home in tribute to this passage from Walden:  "If a man does not keep pace with his companions, perhaps it is because he hears a different drummer.  Let him step to the music which he hears, however measured or far away."  Bill's family knows he is hearing this music even now. Bill is survived by his cherished and caring wife, Jeanne, of Godfrey, who was by his side in his last days.  He is also survived by his son Benji (Kate), grandsons Oscar William and Harry Patrick; stepson Neil Morrissette; stepdaughter Mary Lisa (Morrissette) Caswell; nieces Anne (Whalen) O'Connell, and Susan; nephews Thomas, Matthew, Joseph and Daniel; the mother of his son, Benjamin, Maggie (Stafford) Whalen.  Bill loved all of his family members deeply.  He was preceded in death by his father and mother, his brother James, and his sister Helen.  Private services will be held at Gent Funeral Home in Alton. Father Steve Janoski will officiate. Burial will be at St. Patrick’s Cemetery in Godfrey.  Memorials may be made to the Alzheimer’s Association.  Online guestbook and information may be found at www.gentfuneralhome.com

The family of William Edward Whalen created this Life Tributes page to make it easy to share your memories.

Send flowers to the Whalen family.