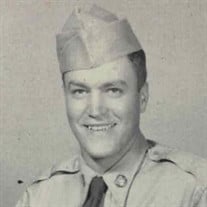 Dateline: Grafton William Henry “Bill” Ridder Jr., 88, was called home December 4, 2021 at River crossing Nursing Home of Alton. He was happily baptized into the Catholic Church in March of this year. He was born to the late William Sr. and Anna Dell (Deadman) Ridder. After graduation from Alton High School, he served his country honorably at the end of the Korean War as a military policeman in Germany. Returning from Military service, he worked at Owens Illinois Glass Co. in the mold repair department for 32 years. He married Mary Atwood and they had two children, Dr. William (Karine) Ridder III of Cypress, CA and Vicky Flye (deceased). He later married Delores Johnson and had one child, Michael Ridder (deceased). He had a very close and loving relationship with Mary’s three daughters, Pam Vickory of Raymond, IL, Terry Morgan of Bethalto, IL, and Dawn Younger of Godfrey, IL. He also leaves three brothers, Frank Ridder of Godfrey, James (Carole) Ridder of Batavia, IL and Ronald (Marge) Ridder of Alton. Also to cherish his memory are several grandchildren, great grandchildren, nieces and nephews. During his lifetime he enjoyed hunting, fishing, mushrooming, farming and good times with his many friends. Visitation will be from 1:00 p.m. – 4:00 p.m. Sunday, December 19, 2021 at Gent Funeral Home in Alton. A funeral Mass will be celebrated at 10:00 a.m. Monday, December 20, 2021 at St. Mary’s Catholic Church in Alton. Burial will be at Elsah Cemetery in Elsah, IL. Memorials may be made to the American Cancer Society or St. Mary’s Catholic Church in Alton. The family would like to give a special thank you to the very compassionate people of the BJC Hospice team and the great workers of River Crossing Nursing Home in Alton. Online guestbook and information may be found at www.gentfuneralhome.com

Dateline: Grafton William Henry &#8220;Bill&#8221; Ridder Jr., 88, was called home December 4, 2021 at River crossing Nursing Home of Alton. He was happily baptized into the Catholic Church in March of this year. He was born to the late William... View Obituary & Service Information

The family of William "Bill" Ridder Jr. created this Life Tributes page to make it easy to share your memories.

Send flowers to the Ridder family.