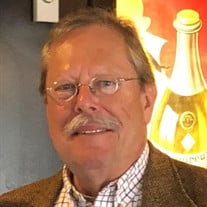 William Robert Edmiston, 77, of St Louis, passed away on May 8, 2022. William was born in Alton, Illinois February 8, 1945. Bill graduated from Alton High School in 1963. He received a bachelor of science in Aerospace Engineering from Georgia Tech in 1969. Bill was in the USAF ROTC program while attending Georgia Tech. He later received his MBA at UMSL. He began interning at McDonald Douglas in his Junior year at GT and finished his one-employer career at Boeing in 2010. As his mom tells it, when Bill was 5, he told her that he wanted to be an aeronautical engineer. He never looked back, focusing on his goal and was even more dedicated when USA began the moon race. He worked on many space and defense projects with teammates that he respected and trusted and become life long friends. One of his colleagues wrote that Bill stood for the best in engineering … “your loyalty to what was right and what was good for America was as true as anyone who has ever served in uniform, your engineering served us better than had you committed to USAF.” The one thing that was the thread throughout his life was his love for America. This love wove its way into his everyday life. He was an avid collector of Early Americana and everything that had to do with the spirit of independence and the Revolutionary War. He participated in Revolutionary reenactments, was a purveyor of antiques and a ferocious reader of American History. All that said, he had a reverence for Sir Winston Churchill and the way he lead in more modern times. He spent many vacations following Churchill’s paths throughout England or even tracking down his own ancestry in nearby Scotland. Later in life, he became interested in wine and became a collector and connoisseur of California and French Burgundy wines. He loved to share his collection with friends and enjoy rich and delicious spreads. This also gave him the opportunity to share his authentic dinnerware on a table from the 1700’s. He never disappointed. One thing for sure, Bill was the definition of a renaissance man - He had many talents and areas of expertise. We will miss his stories and witty narrative as well as his attention to every detail. Bill will be interned with his paternal grandfather, Archibald Edmiston, in Haypress, Illinois. Bill was proceeded in death by his parents Lela Bailey Edmiston, William E. Edmiston and brother Dennis K Edmiston. Bill is survived by and was the big brother to Karen L. Boedeker (Mike) of Portage, Michigan, Patricia E. Prose of Scottsdale, Arizona, and Tamara E Nichols (Dave) of Birmingham, Alabama. Dollar($) Bill, as he was affectionately known, leaves behind Nieces and Nephews: Brian Boedeker (Penny) and Brooke Boedeker Wilson both of Godfrey, IL, Kelly Alexander (Josh) of Fayetteville, Arkansas and Spencer W Nichols of Birmingham, Alabama. As well as 5 great nieces: Faith Wallace(Jacob), Paige Boedeker, Kaitlyn Boedeker, Macy Wilson, Kate Wilson all of Godfrey, IL and Arden Alexander of Fayetteville, Arkansas. Bill had a Beagle or Bassett hound over most of his adult life. All of them were named Molly - why mess with perfection. They were great companions and built-in exercise for him. The current Molly will be making her home with Brian Boedeker’s family in Godfrey. Donations should be directed to the Humane Society of Missouri. Words are the only things that last for ever. The most tremendous monuments or prodigies of engineering crumble under the hand of time. The pyramids moulder, the bridges rust, the canals fill up, grass covers the railroad track; but words spoken two or three thousand years ago remain with us now, not as mere relics of the past, but with all their pristine vital force. - Winston Churchill, May, 1938. The family appreciates your support and care during this time.

William Robert Edmiston, 77, of St Louis, passed away on May 8, 2022. William was born in Alton, Illinois February 8, 1945. Bill graduated from Alton High School in 1963. He received a bachelor of science in Aerospace Engineering from Georgia... View Obituary & Service Information

The family of William Robert Edmiston created this Life Tributes page to make it easy to share your memories.

William Robert Edmiston, 77, of St Louis, passed away on May...

Send flowers to the Edmiston family.