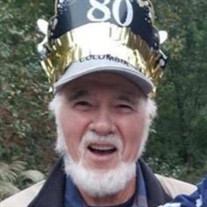 Dateline: Alton William Charles Ackerman, 81, died at 10:15 a.m. Sunday, May 17, 2020 at his home in Alton. Born October 17, 1938 in Alton, he was the son of Herman L. and Marie S. (Brunsworth) Ackerman. He will be missed by his wife, daughter, son, grandchildren, great-granddaughter, sister and all those that knew him. After graduating from Alton High School, he was drafted by the Chicago White Sox as a left-handed pitcher, his brief career ended due to a knee injury. He was employed by Olin Corporation and retired after 40 years of service. After retiring, he enjoyed working at the Woodlands Golf Club and Rolling Hills Golf Course. He was a member of the Knights of Columbus; you could find him there every Friday during Lent volunteering for the fish fry. He also volunteered for the Hayner Library. Bill knew everyone. He might have called you by another name, but he knew you and always had a memory or story. He loved to BBQ and knew his way around the grill and always enjoyed Friday Hamburger Night with the girls and who ever came through the front door. He enjoyed being outside, working in the yard, watching Cardinal Baseball and Saturday morning golf with The Golfing Guys. The thing he loved most was laughing, spending time with his family, doing silly dances, playing with Leah, Sunday football, dinner with the girls, annual apple picking and ice cream adventures, catching up with the latest shows and putting his own spin on the news. We will miss his sense of humor, infectious laugh and the twinkle in his eyes. He was loved by many. Surviving are his wife, Carolyn, daughter and son-in-law, Beth and Tim Johnes, son, Chip, granddaughters, Lauren, Sarah and Suzi, grandsons, Zach and Chris, a very special great-granddaughter, Leah, sister, Kathlyn Tillman of Bella Vista, Arkansas, brother-in-law and sister-in-law, Phillip and Jackie Afflack, sister-in-law and brother-in-law, Cathy and Terry Taul, sister-in-law, Linda Ackerman, and many nieces and nephews. Along with his parents, he was preceded in death by his brother, Robert and in-laws, Phillip and Naoma Afflack. A memorial service will be held at a later date. Memorials may be made to SS Peter & Paul Catholic Church or Catholic Charities. Gent Funeral Home in Alton is in charge of arrangements. Online guestbook and information may be found at www.gentfuneralhome.com

The family of William Charles Ackerman created this Life Tributes page to make it easy to share your memories.

Send flowers to the Ackerman family.