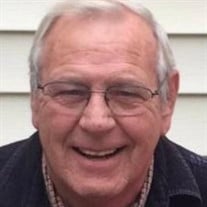 Dateline: Alton, IL Vernon Gene Shafer, 74, died at 1:05 a.m. on Wednesday, August 4, 2021, at St. Elizabeth’s Hospital in O’Fallon, IL. He was born January 6, 1947, in Peoria, IL the son of the late Wendell Gene and Rosalie (Baldwin) Shafer. Vernon served in the U.S. Army during the Vietnam War. He was a district manager with retail companies for many years. On May 2, 2015, at Graceland in Memphis, TN he married Patricia Ann Berry and she survives. Also surviving are two sons; Nick Shafer (Christy) of Winnetka, IL and Chad Shafer (Elizabeth) of Dallas, TX., five grandchildren; Elinor, Estelle, Cate, George and Emme Shafer, two stepsons; Steven Sumner (Nicki) of Edwardsville, IL and William Sumner (Diana) of Alton, and two step grandchildren; Jack Sumner and Kiley Sumner, and one brother, Rollin Shafer (Debbie) of Peoria, IL. No services are scheduled at this time. Memorials may be made to the 5A’s Animal Shelter.

The family of Vernon Gene Shafer created this Life Tributes page to make it easy to share your memories.

Send flowers to the Shafer family.