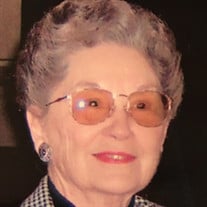 Verna M. (Van Tassel) Wilson, 95, passed away on Thanksgiving Day at Cedarhurst in Bethalto. She was born February 18, 1925, in Jersey County, a daughter of the late Lloyd and Bertha (Busch) Maguire. She married Everett R. Van Tassel in 1944 and he died in 1974. She then married James A. Wilson in 1983 and he died in 2003. Verna was a homemaker in the true sense of the word being able to conquer any task before her. She was an accomplished seamstress having worked for Vogue and Arthurs for many years and working independently from her home until retiring at the age of 90. She was a long-time member of Elm Street Presbyterian Church. She is survived by her dear sister, Rowena McIntire of Atlanta, GA; three daughters and a son: Donna M. (Dan) Amick of Alton, Linda K. Leckrone of Edwardsville, Patti Wilson (Jack) Marcum of Louisville, KY and Steve (Diane Rudolph) Wilson of Pittsburgh, PA; two grandsons: Christopher (Stefani) Wilson and Matthew (Lauren) Wilson; four great grandchildren, three step grandchildren, special nieces, nephews and extended family. In addition to her parents and husbands, she was preceded in death by her sister and brother-in-law, Maurita and Elmer Harbour, her brother and sister-in-law, Ralph and Mildred Maguire, a brother-in-law, Harry McIntire, special in-laws, Bud and Virginia Van Tassel, a son-in-law, James Heil, a niece, Mary Dunnagan and a nephew, Vernon Harbour. A celebration of her life will be held at a later date. The family would like to express great appreciation to the staff at Cedarhurst of Bethalto and the staff of Vitas Hospice for the special care and love given to Verna. Memorials may be made to Vitas Community Connections, 8 Executive Drive, Suite 150, Fairview Heights, IL 62208 or online at [email protected] Gent Funeral Home is in charge of arrangements.

Verna M. (Van Tassel) Wilson, 95, passed away on Thanksgiving Day at Cedarhurst in Bethalto. She was born February 18, 1925, in Jersey County, a daughter of the late Lloyd and Bertha (Busch) Maguire. She married Everett R. Van Tassel in 1944... View Obituary & Service Information

The family of Verna M. Wilson created this Life Tributes page to make it easy to share your memories.

Send flowers to the Wilson family.