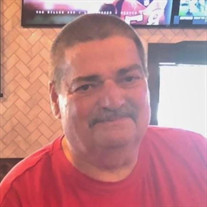 Thomas “Tom” Halvorsen, 72, died at 9:36 p.m. on Tuesday, January 4, 2022 at Barnes Jewish Hospital in St. Louis, MO. He was born May 8, 1949 in Chicago, IL the son of the late Harry and Anne (Krosvic) Halvorsen. He was retired from Olin Corporation as a supervisor and was co-owner with his wife Roxie, of Norbs Tavern in North Alton. Tom was a U. S. Navy Vietnam Veteran. On February 14, 1992 in Lake Tahoe, NV he married the former Roxie Lewis, and she survives. Also surviving are two sons, Tom Halvorsen (Karen) of St. Petersburg, FL and Brian Halvorsen of New Milford, CT., a step-daughter, Angela Meyers of Hillsboro, IL, one sister, Karen Halvorsen of Larkspur, CA and two brothers, Richard Halvorsen (Shari) of Sun City Center, FL and Harry Halvorsen of Harwinton, CT., several grandchildren and great grandchildren. No services are scheduled. Memorials may be made to the 5A’s Animal Shelter. Gent Funeral Home is in charge of arrangements. Additional information and online guest book may be found at www.gentfuneralhome.com

The family of Thomas "Tom" Halvorsen created this Life Tributes page to make it easy to share your memories.

Send flowers to the Halvorsen family.