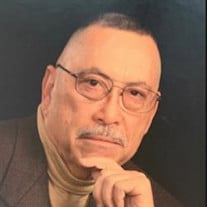 Rev. Thomas P. Asbury, age 74, passed away Wednesday, March 3, 2021, at Alton Memorial Hospital. He fought a long battle with Parkinson's Disease contracted from Agent Orange in Vietnam. He was born November 22, 1946, in Mansfield, OH, to John and Belva (Fraley) Asbury. He grew up in Reseda, California, and attended Reseda High School. Tom served with the United States Army from 1964 to 1977. He was a veteran of the Vietnam war serving with the 1st Infantry Division and Korea and served as Chaplain of VFW Post 1308 for over 15 years. After his service in Vietnam, Tom was assigned to Oklahoma State University as part of the ROTC cadre’, where he met his wife, Karla. They were married on May 12, 1973, in Miami, OK, and they enjoyed almost 48 years together. After leaving the Army, Tom graduated from Southeastern Baptist Theological Seminary in Wake Forest, NC. Tom served the Lord as a Southern Baptist Pastor for 29 years in NC and IL churches. Tom was a member of Calvary Baptist Church in Alton and a member of the most loving Life Group. Tom is survived by his wife, Karla (Choate) of Alton, IL, and four sons, Barney & Christina (Fuller) Asbury of Moore OK, Matthew & Elizabeth (McMahan) Asbury of Hartford, IL, Marc & Marna (Goewey) Asbury of Oklahoma City, OK and Andrew and Lori (Haggard) Asbury of Amarillo, TX. Also surviving are four grandchildren: Emile Schneider of Wood River, IL, Kyle Asbury of Oklahoma City OK, Logan Fuller of Grafenwoehr, Germany, Morgan and Hayley Asbury of Moore, OK and great-grandchildren Natalie and James Schneider and Brycelynn. He is also survived by one sister, Brenda (Michael) Metcalf of Santa Clarita, CA, and two brothers, William Asbury of Houston, TX, and Bradley Asbury of Southern California. Preceding Tom in death was his mother and father John & Belva Asbury, one brother John L. Asbury Jr., and one sister, Becky White. Visitation will be from 12:00 noon until time of funeral service at 2:00 p.m. Monday, March 8, 2021, at Calvary Baptist Church in Alton, with full military honors by the VFW Post 1308. Reverend Andre’ Dobson will officiate. Services can be viewed online at Calvarycares4u.org. Burial will be at Fort Sill National Cemetery in Elgin, OK. Memorial donations can be made to the St. Louis Chapter of the American Parkinson Disease Association. Gent Funeral Home in Alton is in charge of arrangements. Online guestbook and information may be found at www.gentfuneralhome.com

The family of Rev. Thomas P. Asbury created this Life Tributes page to make it easy to share your memories.

Send flowers to the Asbury family.