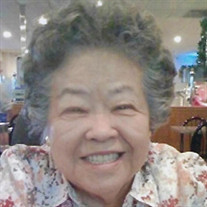 Sumiko (Osaki) Kwas, age 91, of Godfrey, Illinois, died at 6:40 a.m. on Tuesday, September 28, 2021, at Alton Memorial Hospital. She died peacefully a few days after a sudden cardiac event. Born in Choshi in Chiba prefecture in Japan on September 1, 1930 to Shotaro and Chiyo (Tennebe) Osaki. She married Frank Kwas in October 1951, who preceded her in death in June 1988. She was a busy homemaker and excellent cook. Besides her talent for preparing wonderful traditional cuisines, she was celebrated for her Japanese cooking and famous for her almond poundcake. She was wise counsel to her family and great family historian of Japanese history and culture. Surviving are her children Charles Kwas of Bethalto, John (Paula) Kwas of Brighton, Frank (Kim) Kwas of Oxford, Mississippi, and Carol (David) Gentry of Godfrey; seven grandchildren: Andrea Schwartz, Brad (Destiny) Kwas, Robert (Amanda) Kwas, Kevin (Emily) Kwas, Vincent Kwas, Amy Kwas, Sarah Kwas; five great-grandchildren; and one sister, Kimi Tanaka, of Choshi, Japan. Besides her husband, she was preceded in death by her daughter-in-law Lori Kwas and three brothers. Private funeral services will be held at a future date. Gent Funeral Home is handling the arrangements. Memorials can be made to the American Heart Association or the American Diabetes Association. An online guestbook and information are available on gentfuneralhome.com.

The family of Sumiko Kwas created this Life Tributes page to make it easy to share your memories.

Send flowers to the Kwas family.