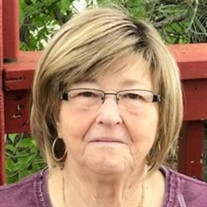 Brighton Sharilyn Lee Beem, 79, died at 1:32 p.m. Saturday, November 27, 2021 at Alton Memorial Hospital with her family by her side. Born September 3, 1942 in St. Louis, MO, she was the daughter of the late Dwight W. and Mozelle O. (Bach) Cope. In her early years, Sharilyn worked at the family business, Cope Plastics, before staying home to raise her girls, all the while remaining a member of the Board of Directors. She married Donald F. Beem on December 23, 1961 in Alton. He survives. Also surviving are four daughters, Cynthia Smalley (David) of Godfrey, Roxanne Wittman (Michael) of Alton, Jane Saale (Steve) of Brighton, and Donna Rintoul (Dave) of Brighton, five grandchildren, Nicholas Wittman DC (Jenni), Hannah Combs (Jack), Haley, Taylor and Logan Jansen, four great grandchildren, Lily and Olive Wittman and Christian and Callie Combs, and her twin sister, Marilyn Kuhn (Andy) of Brighton. She is also survived by her step-grand children, David Smalley Jr., Austin Spitler, and Phillip Saale, and step great grandchildren, Cody Smalley, Abbi Smalley, Cameron Spitler, Dallin Spitler, Hatley Saale and Hayden Saale and many nieces and nephews. In addition to her parents, she was preceded in death by a grandson, Alex Beem Wittman. Sharilyn was a member of Godfrey First United Methodist Church since 1958. She was a member of the United Methodist Women, Board of Trustees, and chair of the Memorial Committee. Active in the community, she was a longtime financial supporter of Lewis & Clark Community College and many other local organizations. She served in the Godfrey Women’s Club where she was the historian for many years and President from May 1978-December 1979 and then again in 1998. She won the Silver Spoon Award in 1983 and she was co-chairman of the Carousel 4 times. Sharilyn was a Non-Hodgkin’s Lymphoma cancer survivor and a breast cancer survivor. She was a proud supporter of the Susan G. Komen Walk for Breast Cancer on Team Cope Plastics for many years. She was a supporter of the Southwest Illinois Division of United Way and Friends of Kids with Cancer. She was an avid Bridge player for 30 years and loved to play Euchre. She loved paper crafts and enjoyed getting together with all her special friends. Sharilyn supported everything her girls were involved in. She was an excellent cook and baker and seamstress. She baked and decorated all four of her girls’ and grandchildren’s wedding cakes. Sharilyn loved her family and was taken much too soon, however, we know that she is with our Lord and Savior without physical pain. Private graveside services will be held at Rose Lawn Memory Gardens in Bethalto. Reverend Don E. Long Jr. will officiate. A celebration of life service will be held at a later date. Memorials may be made to the Godfrey First United Methodist Church or the Godfrey Women’s Club. Gent Funeral Home in Alton is in charge of arrangements. Online guestbook and information may be found at www.gentfuneralhome.com

The family of Sharilyn Lee Beem created this Life Tributes page to make it easy to share your memories.

Send flowers to the Beem family.