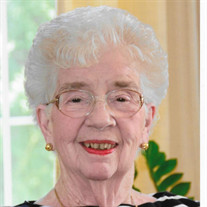 Ruby Jean Fritz (née Morten) died peacefully in at her home in Godfrey, Illinois on May 6, 2021 at the age of 92. Ruby was born on October 30, 1928 in Equality, Illinois to William and Muriel (Henderson) Morten. She graduated from Alton Senior High School in January 1946. She married Herold A. Fritz on October 4, 1960 at Trinity Lutheran Church in Alton, Illinois. Ruby is survived by her son and his wife, David and Paula Fritz, of Godfrey, Illinois, her Granddaughter and her husband, Taylor and Jordan Bodenbach of Godfrey, Illinois, her Grandson, Matthew Fritz of Godfrey, Illinois and her Great Granddaughter, Isla Jean Bodenbach of Godfrey, Illinois. Ruby is also survived by several Nieces and Nephews, Rick (Debbie) Grove, Steve (Susan) Morten, Mike (Mary) Morten, Nancy Grove, Don (Bev) Fritz, Marilyn Shipp, and Liz (Gerry) Rickel. And many Great Nieces and Great Nephews. She was preceded in death by her husband, Herold and her Sister, Wilma Grove and Brother, Curtis Morten and Nephews, Larry Grove and Tom Shipp. Ruby was employed by Alton Banking & Trust Co., the Wedge Bank, on January 18, 1946 as a Secretary. During her career she worked in many areas of the bank and was Sr. Vice President and Secretary to the Board of Directors when Wedge Bank was acquired by Mercantile Bank. She continued to work at Mercantile Bank of Illinois, serving as Vice President and Coordinator of its MESA Club. Ruby celebrated 50 years in banking in January 1996 and retired from Mercantile Bank of Illinois on March 31, 1996. Ruby was a member of the National Association of Bank Women, Inc, serving as its Chair of the Metropolitan St. Louis Region in 1962. She also volunteered with the Greater Alton Concert Association, where she served as its Treasurer for 6 years. She also worked with Pride, Inc., and the Alton Business & Professional Women’s Club. Ruby was a member of Resurrection Lutheran Church in Godfrey, IL. Visitation will be from 4:00-8:00 p.m. Thursday, May 13, 2021 at Gent Funeral Home in Alton where funeral services will be at 10:00 a.m. Friday, May 14, 2021. The Reverend Gerry F. Rickel will officiate the ceremony. In lieu of flowers, please consider a donation to the Alton Band and Orchestra Builders PO Box 3284 Alton, IL 62002 or the Alton Educational Foundation PO Box 514 Alton, IL 62002. Online guestbook and information may be found at www.gentfuneralhome.com

Ruby Jean Fritz (née Morten) died peacefully in at her home in Godfrey, Illinois on May 6, 2021 at the age of 92. Ruby was born on October 30, 1928 in Equality, Illinois to William and Muriel (Henderson) Morten. She graduated from Alton Senior... View Obituary & Service Information

The family of Ruby Jean Fritz created this Life Tributes page to make it easy to share your memories.

Send flowers to the Fritz family.