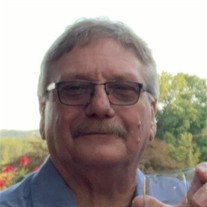 Dateline: Alton Ronald Keith Pugh, 66, died at 2:24 p.m., Friday, October 8, 2021, at his home in Alton. Born August 19, 1955, in Alton, he was the son of Don B. and Fern E. (Short) Pugh. He served in the U.S. Air Force and retired as a manager for Illinois Bell/A T & T. He loved spending time with his children and grandchildren. On November 15, 1980, he married the former Gloria M. Pulido in Godfrey. She survives. Also surviving are two daughters, Amy Palmer (Jeff) of Little Rock, AR, and Erika Jacobs (Ed) of Godfrey, a son, Frank Kuchnicki (Angela) of Alton, six grandchildren, Emma, Will and Nate Palmer, Sophia, Adam and Ana Jacobs. He is also survived by three brothers, Roger Pugh of Alton, Don Pugh of East Alton, and David Pugh (Melissa) of East Alton, as well as multiple nieces and nephews. Along with his parents, he was preceded in death by a brother, Larry Pugh. A memorial visitation will be from 4:00-7:00 p.m. Tuesday, October 12, 2021, at Gent Funeral Home in Alton. Memorials may be made to the American Cancer Society or the American Heart Association. Online guestbook and information may be found at www.gentfuneralhome.com.

The family of Ronald Keith Pugh created this Life Tributes page to make it easy to share your memories.

Send flowers to the Pugh family.