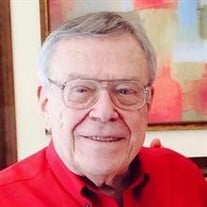 Ronald Charles Mottaz, 89, passed away March 24. He was born on October 23, 1931 in Hardin. He was the son of Rolla John and Eunice Elizabeth (Clevenger) Mottaz. He married Dorothy Jean “DoJe” Elfgen on August 15, 1953 in Alton. She preceded him in death on February 24, 2021. Surviving are two daughters, Vicky Osborn (David) of Godfrey, Susan Leonard (Joe) of Alton, and one son, Mark Mottaz (Ainette) of St. Louis. Also surviving are eight grandchildren and five great grandchildren; Vicky’s daughters Heather Wheeler (Chris) and their sons Lucas and Parker, Kelly Stafford (Andy) and their daughters Valarie, Caitlyn, and Maxine; Susan’s children Matthew, Bradley, Natalie, and Mackenzie Leonard; and Mark’s daughters Gabrielle Mottaz and Brianna Finnegan (Tyler). Also surviving are a brother, Steven N. and sister-in-law Judith (Leonard) Mottaz. Ron graduated from DePauw University in 1953 and the University of Illinois Law School in 1956. He was a successful attorney in Alton his entire career, as a partner with Thomas, Mottaz, and Eastman before spending the last twenty years owning and operating Community Title and Escrow with his son Mark. Over the years he served on several area Boards of Directors including the Godfrey Utility Board, Nature League, and as President of the Alton School Board. He may best be remembered for his charm and great sense of humor. He loved playing golf, reading, listening to jazz and big band music, playing his clarinet in the New Horizons Band, eating ice cream, having a vodka on the rocks with an olive, and spending time with, and caring for, his family. Gent Funeral Home in Alton is in charge of arrangements. Online guestbook and information may be found at www.gentfuneralhome.com. Services will be private. Memorials can be made to the New Horizons Band or Godfrey First United Methodist Church.

The family of Ronald Charles Mottaz created this Life Tributes page to make it easy to share your memories.

Send flowers to the Mottaz family.