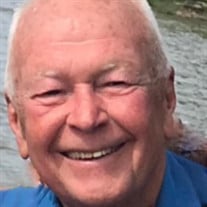 Dateline: Godfrey, IL The party’s over-the humor has ceased- a one of a kind has finished his earthly tour. Robert Graham Legate, 78, of Godfrey died at his residence on Saturday, June 20, 2020. He was born on August 27, 1941 to Robert Henry and Carrie Louise (Templeton) Legate in Alton, IL. Growing up in Fosterburg, he married Saundra Kay (White) on March 25, 1961 in Alton, IL. He is survived by his wife, Sandy, their two sons; Robert (Jeri) their children Kayri (James) Reynolds, Dr. Kaydi (Nick) Grote, Dr. Kayci (Pat) Sackmann, and Kayli Legate; Todd (Trudy), their children Chris (Marie) and Danny (Lauren); along with 9 great grandchildren and one expected in July. He was preceded in death by his parents and infant sister, Mary Francis. A graduate of Alton High School, Bob was a Machinist and Tool and Die Maker by trade, but was considered a “Jack of all trades”. He began his career working at Owens Illinois Glass, Alton, then moved to Owens Illinois Machine Mfg. in Godfrey. After 8 years with Owens Illinois, he then was employed with Alcan Ammunition for 7 years, Schoeneweis Tool and Die for over 16 years, and then finished his machinist career in 2006 at Olin Corporation with 14 years of service. Bob was a true family man that always put his family and friends first, following a firm belief in God. He and his family worked side by side and established Legate Farms in Pike County. “The Farm” was recognized as a place where you worked hard and played hard. Through his committed goal, he realized his dream of owning his own machine shop, Circle L Machine and Fabrication. He and Sandy continued the Jersey County family legacy by purchasing adjoining acreage to their Rosedale family farm, which has been in their family since the early 1800’s. Bob loved to travel and took Sandy on many adventures over their 59 years of marriage. If there was a party or good time, you could expect him to be right in the middle of the event. His presence was always felt, whether it be a good story, a joke, crazy antics or a welcoming smile. Following his family’s long-standing legacy of Masonic membership, Bob was a Demolay and belonged to the Franklin Masonic Lodge #25, Ainad Shriners, Knights Templar and Scottish Rite bodies. He was a proud member of the Machinist Union, serving as a Shop Steward, Safety Committee Chair and participating in contract negotiations. He was a member of the Alton Motorboat Club, Kampsville American Legion, Elsah Methodist Church, and a volunteer at Alton Memorial Hospital. Bob proudly served in the United States Coast Guard and completed his reserve responsibilities. Given the current Covid-19 pandemic, a private burial will be held at Rosedale Cemetery with a Masonic Service from the Franklin Masonic Lodge #25 and full military honors by the Kampsville American Legion. Pastor Alan Abert will officiate. Memorials may be made to the Elsah Methodist Church or Rosedale Cemetery. Additional information and online guest book may be found at www.gentfuneralhome.com

Dateline: Godfrey, IL The party&#8217;s over-the humor has ceased- a one of a kind has finished his earthly tour. Robert Graham Legate, 78, of Godfrey died at his residence on Saturday, June 20, 2020. He was born on August 27, 1941 to Robert... View Obituary & Service Information

The family of Robert Graham Legate created this Life Tributes page to make it easy to share your memories.

Send flowers to the Legate family.