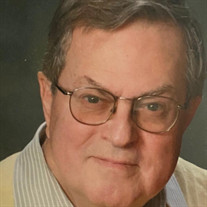 Dateline: Godfrey Dr. Robert Valentine Denby, 83, died at 10:45 a.m. Thursday, April 9, 2020 at his home. He was born on March 23, 1937 to the late Clarence E. Denby and Gertrude A. (Gahr) Denby in Alton, IL. Robert married Nancy E. Dotson on August 17, 1968 at Cherry Street Baptist Church in Alton and they had almost 52 years together. They were blessed with three children, John F. Denby of Plano, TX, Ruth A. (Roger) Waggener of Alton, and Mark D. (Melissa) Denby of Godfrey; and six grandchildren, Isaiah, Gideon, and Elsie Waggener of Alton and Taylor, Gabriella, and Emry Denby of Godfrey. Also surviving is a brother, Donald Denby of St. Augustine, FL. He was preceded in death by a brother, Jack Denby. He was a 1955 graduate of Alton High School. He earned a BS in education from SIU Carbondale, an MA in English & Literature from SIU Edwardsville, and a PhD in Curriculum and Instruction from the University of Illinois. While at U of I he was a senior research associate for National Council of Teachers of English. He taught English at West Junior High School in Alton for 7 years; taught 22 years at University of Missouri, Kansas City, where he received the Chancellor’s Excellence in Teaching Award; and 14 years at SIU Edwardsville retiring from there in 2009. Longtime member of DeMolay and Franklin Masonic Lodge #25 in Alton, where he served in many capacities including leading the DeMolay Dance Band. Robert served as a deacon at Nall Avenue Baptist Church in Prairie Village, KS and was on various church committees, as well as teaching Sunday School and vacation Bible school. He provided leadership and mentoring for Cub Scouts, Boy Scouts and Girl Scouts. He was a member of the Board of Planning for the City of Mission, KS; member of Board for Heart of America Indian School, member of North Central Association of Colleges and Secondary Schools. He was a recipient of Boy Scouts of America, Order of Arrow Vigil Honor. His vigil name was “Devoted Humble Mentor.” He also received the Good Shepherd Award from BSA and the Association of Baptists. In 2014, he was named as a member of the inaugural group of Distinguished Alumni of Alton High School. Robert’s life was spent in pursuits with the goal of promoting faith in the creator and the betterment of youth and community. God, country and family were the center of his humble, yet extraordinary life. Services will be private with Reverend Alex Melton officiating. Memorials may be given to one of the following organizations whose vision align with Robert’s servant heart; Alton Educational Foundation, Alton Band and Orchestra Builders and Heartland Baptist Church. Gent Funeral Home in Alton is in charge of arrangements. Online guestbook and information may be found at www.gentfuneralhome.com

The family of Dr. Robert Denby created this Life Tributes page to make it easy to share your memories.

Send flowers to the Denby family.