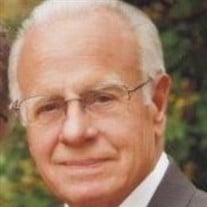 Dateline: Godfrey Robert Dressel Bowen Sr., 84, died at 9:01 a.m. Saturday December 26, 2020 at his home in Godfrey. Born March 2, 1936 in Alton, he was the son of Robert N. and Eleanor (Dressel) Bowen. Mr. Bowen was a member of the Godfrey First United Methodist Church in Godfrey and retired as a pipefitter for the Olin Corporation in 1998 after 42 years of service. He was a member of the Sigma Chi Fraternity, the Alton-Wood River Sportsmen’s Club and a lifetime member of the Westerner Club. On December 7, 1955 he married the former Marian Rogers in Portsmouth, Ohio. They celebrated their 65th wedding anniversary this year. With raising four sons Bob attended 22 years of baseball, basketball, football, and soccer games along with concerts and musicals and never having missed one. Bob had been a St. Louis Cardinal baseball fan since the late 1930’s. He was an avid gardener, winning Pride Home of the Month June 2012. Along with his wife Marian, Bob is survived by four sons, Bob Jr. and Robin Bowen of Loudon, Tennessee; Andy and Ann Bowen of Godfrey; Steve and Deana Bowen of Hartselle, Alabama; and Joe and Michelle Bowen of Jefferson, Texas. Also surviving are eight grandchildren, Michael, Michelle, Tara, Ellie, Jack, Reese, and Will Bowen and Lauren (Daniel) Fagerman, and four great grandchildren, Lorelei, Oliver, Felicity and Harry Fagerman. A brother and sister-in-law, William and Dorothy Bowen of St. Charles, MO, sister-in-law, Phyllis Whisler and brother-in-law, Dr. S. Douglas and Ellen Rogers all of Cincinnati, OH, nine nieces and nephews and many cousins. Along with his parents, he was preceded in death by a granddaughter, Christin Bowen, two sisters, Janet Bowen and Marcia Bowen and a nephew, Tom Whisler. Services will be private at Gent Funeral Home in Alton. Reverend Jay Hanscom will officiate. Burial will be at Kane Cemetery. A celebration of life will be held at a later date. Memorials may be made to Shangri-La Therapeutic Academy of Riding (STAR), 11800 Hwy. 11E, Lenoir City, TN 37772, www.rideatstar.org or the Godfrey First United Methodist Church. Online guestbook and information may be found at www.gentfuneralhome.com

The family of Robert Dressel Bowen Sr. created this Life Tributes page to make it easy to share your memories.

Send flowers to the Bowen family.