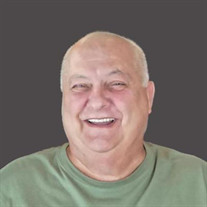 Dateline: Godfrey, IL Richard "Dick" Leroy Tindall, 74, died at 6:45 p.m. on Saturday, June 5, 2021, at his home surrounded by loved ones. He was born July 31, 1946, in East St. Louis, IL the son of the late Harold and Betty (Moore) Tindall Sr. He served in the U.S. Air Force during the Vietnam war and was the owner of Tindall Composites. His greatest joy was spending time with his loving family and friends. He was an avid supporter of St. Louis sports. Richard was a man of many words and stubborn to the end. On July 17, 1971, in Fairview Heights he married Cheryl "Susie" Cassady and she survives. Also surviving are one son, Scott Tindall (Genevieve) of Alton, three grandchildren, Pierce Tindall (Katherine), Brayden Tindall and Ian Tindall, one great grandchild, Paisley Tindall and several brother and sisters: Harold Tindall, Jr., Robert Tindall (Vicki), Ginny Bosler (Ralph), Tom Tindall (Judy), Randy Tindall (Kim), Karen Tindall-Banta (V.G.) and Paula McDaniel. He was preceded in death by brother in laws, Thomas “Garry” Cassady, Michael Cassady and Harold Tojo, Jr., and one sister-in-law, Ann Tindall. Open House Celebration of Life will be held June 27, 2021,from 2:00 p.m. to 5:00 p.m. at Julia's Banquet Center, 101 Eastgate Plz, East Alton, IL 62024. In lieu of flowers memorials may be made to the American Cancer Society or a charity of one’s choice. Additional information and online guest book may be found at www.gentfuneralhome.com

The family of Richard Leroy Tindall created this Life Tributes page to make it easy to share your memories.

Send flowers to the Tindall family.