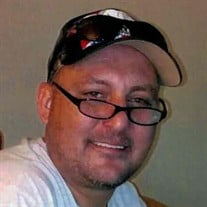 Richard “Rick” Repmann II, 46, died at 3:44 p.m. Tuesday, September 28, 2021 at St. Louis University Hospital from injuries sustained in a bicycle accident. Born April 24, 1975 in St. Louis, MO, he was the son of Richard “Rich” Repmann of Alton and the late Joy (Broadwater) Repmann. Rick was so full of life and never met a stranger. He couldn’t go anywhere without seeing someone he knew or making new friends. He has overcome many obstacles in his life and prevailed. He had a great heart but acted like a tough guy. He loved his entire family very much. He also loved his mama cat more than anything in this world. He has a been a chef at many restaurants until he became disabled. Rick is survived by his dad and stepmother, Rich and Martha Repmann, a sister, Rhonda Miller, a stepsister, Kim Klopfer, son, Ricky Repmann. Also surviving is his fiancé Mary Hurst and her daughters, Christina Weiss, Cheryl Hurst and Jasmine Hurst. And grandchildren, Leela Mae, Izzy, Gavin, Conner, Paisley and Caroline. A few special people in his life, Pauline Cameron, Danny Wieczorek, Cheri Crider, Steve Landreth and Nick Graham. He was preceded in death by his mother, Joy Repmann and a brother, Travis. Rick will be missed so much by his family, friends and acquaintances. Visitation will be from 1:00 p.m. until time of memorial service at 3:00 p.m. Sunday, October 3, 2021 at Gent Funeral Home in Alton. Memorials may be made to Hope Animal Rescues. Rick was an organ donor through Mid America Transplant Services. Cremation rites were entrusted to Gent Funeral Home in Alton. Online guestbook and information may be found at www.gentfuneralhome.com

The family of Richard "Rick" Repmann II created this Life Tributes page to make it easy to share your memories.

Send flowers to the Repmann family.