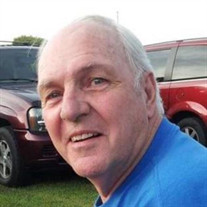 Raymond “Ray” Corlew, 76, passed away at 3:22 p.m. Wednesday, September 15, 2021 at Alton Memorial Hospital. Born January 14, 1945 in Catron, MO, he was the son of Roy and Agnes (Miskell) Corlew. Ray was a U.S. Army veteran and was a member of the Abundant Life Community Church where he served as a deacon for many years. He was a beloved employee at Gent Funeral Home having begun his career in 1977 as a funeral director assistant and chauffer. A position he still held on a part time basis. Ray loved God and his family. He enjoyed attending his grandchildren's sporting and school functions. He was an avid wood worker who enjoyed antiquing and attending auctions. On December 17, 1966 he married the former Joy Young in Parma, MO. She survives. Also surviving is a daughter, April Brown and her husband Rick of Alton, a son, John Corlew of Godfrey, four grandchildren, Rebecca Brown Billingsley (Joshua), Ethan Corlew, Amanda Brown and Megan Corlew. He was preceded in death by his parents. Visitation will be from 4:00-8:00 p.m. Wednesday, September 22, 2021 at Gent Funeral Home where funeral services will be at 11:00 a.m. Thursday, September 23, 2021. Pastor Bob Beloit will officiate. Burial will be at Jefferson Barracks National Cemetery in St. Louis, MO. Memorials may be made to the Mac-Gomery Christian Service Camp, 6876 MacGomery Church Road, Carlinville, IL 62626. Online guestbook and information may be found at www.gentfuneralhome.com

The family of Raymond "Ray" Corlew created this Life Tributes page to make it easy to share your memories.

Send flowers to the Corlew family.