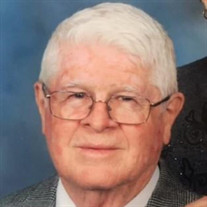 R. Emmett Fitzgerald Fortified with the Sacraments of Holy Mother Church, R. Emmett Fitzgerald passed away peacefully at home with family by his side. He was born at St. Joseph's Hospital, Alton, on February 27, 1926, the eighth of nine children born to the late Daniel M. and Genevieve Degnan Fitzgerald, of Alton. Emmett survived all of his brothers and sisters and their respective spouses: Daniel, Jr.; John and his wife Helen; Genevieve Kulp and her husband Harry; Magalene; Edward and his wife Marguerite; James and his wife Katherine; Rosemary Gilderslieve and her husband James and Margaret Dimitroff and her husband James. On May 7, 1955, Emmett entered into the Sacrament of Matrimony with Joan Marie Garrow at Queen of Martyrs Catholic Church in Chicago. Joan preceded Emmett in death on February 13, 2011. They left surviving six children, thirteen grandchildren and nine great grandchildren: Children: Timothy and his wife Kelly; Michael and his wife Sue; Kathleen; Peter and his wife Michelle; Daniel and his wife Stephanie; and Maura Sedlack and her husband John of Chicago. Grandchildren: Christopher Fitzgerald in London; Ryan Fitzgerald of Minneapolis; Michael S. Fitzgerald and his wife Kelly of Denver; David Fitzgerald and his wife Catherine of Raleigh NC; Molly Ferguson and her husband Troy of Edwardsville; Patrick Fitzgerald and his wife Laura of Jacksonville FL; Joseph, Maria and Jane Fitzgerald of Edwardsville; Katherine, Daniel and Mary Therese of Godfrey and John E. Sedlack of Chicago. Emmett attended St. Patrick's Grade School and Marquette Catholic High School in Alton and earned his bachelor’s degree at the University of Notre Dame and his Juris Doctorate from the Notre Dame Law School. He began his legal career in Chicago as law clerk for the late Justice Roger J. Kiley who later served on the United States Court of Appeals in Chicago. In 1953, Emmett returned to Alton and became an associate at the law firm of Virley, Eastman and Schlafly, which later became Schlafly, Godfrey and Fitzgerald and still later became Hoagland, Fitzgerald, Smith and Pranaitis, for a total of 64 years. During High School, Emmett was employed by Peter Schwegel at old Pearl Market in Alton. Fitzgerald served in the U.S. Navy from 1944 into 1946 during World War II in the various theaters of war. He was a member of the Alton Knights of Columbus, American Legion, Alton-Wood River and Illinois State Bar Associations; served on various boards at St. Patrick's, St. Joseph's, St. Mary's, Marquette High School, Ursuline Convent, St. Anthony's Hospital and the Alton Foundation. He also served on the Board of Directors of First National Bank, Mercantile Bank and U.S. Bank, Alton. Because of COVID-19 restrictions, his funeral Mass will be a private. Interment will be at St. Patrick's Cemetery in Godfrey. The Veterans of Foreign Wars, Alton Post 1308 will provide military colors and honors at the Cemetery. Memorials may be offered to the retired Ursuline Sisters, Marquette High School, St. Mary's Church, OSF St. Anthony's Health Center, and the American Parkinson Association. Emmett also wanted to thank the Oblate Priests at St. Mary’s for continuing Father Suddes' long tradition of providing early morning weekday Masses at St. Mary’s and also the Sisters of Saint Francis of the Martyr St. George for providing the Alton Community with the beautiful Eucharistic Adoration Chapel at St. Anthony’s. Gent Funeral Home in Alton is in charge of arrangements. Online guestbook and information may be found at www.gentfuneralhome.com

R. Emmett Fitzgerald Fortified with the Sacraments of Holy Mother Church, R. Emmett Fitzgerald passed away peacefully at home with family by his side. He was born at St. Joseph's Hospital, Alton, on February 27, 1926, the eighth of nine children... View Obituary & Service Information

The family of R. Emmett Fitzgerald created this Life Tributes page to make it easy to share your memories.

Fortified with the Sacraments of Holy Mother...

Send flowers to the Fitzgerald family.