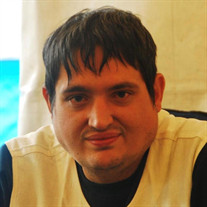 Dateline: Florence, Kentucky Paul Dennis Prager, 33, passed away at St. Elizabeth hospital in Florence, Kentucky on Thursday, August 13, 2020, after a lengthy illness. He was a resident of Cold Spring, Kentucky, near Cincinnati. Born February 22, 1987 in Alton, he was the son of Frank and Christine (Butts) Prager. Paul graduated from Southern Illinois University in Edwardsville with a Bachelor’s degree in Economics and Finance and worked as an auditor in the casino and banking industry during his career. He achieved his Eagle Scout rank in high school and built the existing welcome sign in the town of Dorsey as his Eagle project. He was an ardent St. Louis baseball Cardinals and hockey Blues fan as well as a motor sports racing enthusiast. He enjoyed Friday night board games with a close group of friends in his local area. He was also involved with the Cincinnati area Galladorn chapter of the national Dagorhir Battle Games live action role-playing organization. He was an avid live music fan and attended hundreds of concerts throughout his lifetime. In addition to his parents, he is survived by his brother, Jimmy, of Affton, Missouri. He is also survived by his aunt and godmother, Esther VanBuskirk, of Odin, Illinois, his aunt Dorothy Ward of Fosterburg, his uncles, Thomas (Paula) Prager of Fosterburg, and Bruce Neff of Columbia, Missouri, his godmother and godson, April and Kiel Moeller of Altamont, Illinois, as well as numerous cousins. He was preceded in death by his aunt, Sherrie Neff, his uncle, Wilmer Prager, and his maternal and paternal grandparents. Visitation will be from 4:30-7:00 p.m. Friday, August 28, 2020 at Gent Funeral Home in Alton. Services and burial will be private. Pastor David Kern will officiate. Burial will be at Emmaus Lutheran Church Cemetery in Dorsey. Per the family’s wishes they ask anyone who will be attending visitation to wear a mask, social distance, and to avoid contact with the family. Online guestbook and information may be found at www.gentfuneralhome.com

The family of Paul Dennis Prager created this Life Tributes page to make it easy to share your memories.

Send flowers to the Prager family.