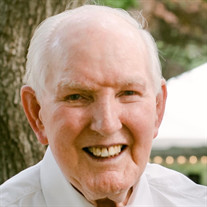 Dateline: Alton Norman Edward Showers, 95, of Alton, passed away peacefully at home on April 9, 2022. In his lifetime, he was a beloved son, husband, father, brother, grandfather, and great grandfather. Born September 21, 1926 in Carlinville, IL, he was the son of Warden S. and Ethel "Honey" (Elkinton) Showers. Dr. Showers was an emeritus Professor of Kinesiology at Southern Illinois University Edwardsville, having taught at the school since its opening in 1957 until he retired in 1983. By then, he had taught students at every level from kindergarten through college. Dr. Showers volunteered and served in the U.S. Army during WWII and continued to serve in the U.S. Army Reserves until he retired with the rank of Captain in 1986. An unfailingly kind and compassionate man, he always had time for others, and he loved to tell jokes and stories to family and friends. Some of his favorite stories were from his time spent in the Army stationed in Alaska, as well as local history and how sports such as basketball and volleyball were invented. Dr. Showers graduated with a Bachelor of Science from Shurtleff College in 1950. On December 24, 1950, he married Norma Ann Headley of Alton at The Garden Chapel in Long Beach, CA. They called each other “Norm,” and they were married for 66 years. He received his master’s and doctorate degrees from the University of Southern California. He was a long time member of Calvary Baptist Church in Alton. He volunteered his time to the Alton Museum of History and Art, Lewis & Clark State Historic Site, Special Olympics, The William M. BeDell Achievement and Resource Center, Gideons International, and Illinois Retired Teacher Association (IRTA). He was also an avid bowler. He wrote the first instructional bowling textbook, and for decades he bowled in local leagues with his younger brother Bob. He is survived by two sons, Robert A. (Elizabeth Bauer) Showers of Alton, and Mark E. (Jeanne) Showers of Alton; two daughters, Carole A. Showers of Alexandria, VA, and Rebecca S. (Richard) Luer of Florissant, MO; six grandchildren, Aimée (Shine) Lin of Chesterfield, MO, Shannon (Jamie) Davis of St. Louis, MO, Katie (Michael) Walsh of Ballwin, MO, Dr. Christopher A. Hesh (Dr. Hee Won Lee) of Atlanta, GA, Cade M. Bauer-Showers (Nona Gronert) of Madison, WI, and Laura G. Hesh of Atlanta, GA; four great grandchildren, Max and Elise Lin, June Suh Hesh-Lee, Michael Walsh Jr.; two sisters-in-law, Mrs. Joyce Showers of Orlando, FL, Mrs. Marilyn Headley of Titusville, FL; a brother-in-law, William “Bill” Meyer of Jacksonville, IL; and many nieces and nephews. Along with his parents, he was preceded in death by his wife, Norma A. Showers; his son, Timothy Michael “Timmy” Showers; two brothers, Robert G. Showers and Maj. Jack R. Showers; a brother-in-law, Charles A. Headley, and two sisters-in-law, Mary Patricia “Pat” Meyer and Betty Showers. A graveside service will be held at 11:45 a.m. Saturday, April 16, 2022 at Valhalla Memorial Park in Godfrey with full military honors. Reverend André Dobson of Calvary Baptist Church will officiate. Due to Covid precautions, no visitation will be held at the funeral home. In lieu of flowers, memorials may be made to the Alton Museum of History and Art, 2809 College Ave, Alton, IL 62002. Online guest book and information may be found at www.gentfuneralhome.com.

The family of Dr. Norman Edward Showers created this Life Tributes page to make it easy to share your memories.

Send flowers to the Showers family.