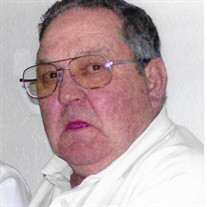 Godfrey-Merle Lee Beuttel, 81, passed away on Monday, September 6, 2021 at Alton Memorial Rehabilitation & Therapy. Merle was born in Godfrey on February 6, 1940 to the late Eldon and Helen (Stevenson) Beuttel. On February 25, 1961, he married the former Janet Sue Wools in the Main Street Methodist Church. They were married over 60 years. In addition to his wife, Merle is survived by three sons and their wives; Stephen (Kay) Beuttel of Heyworth, IL., Bruce (Jennifer) Beuttel of Gresham, WI., Mark (Serena) Beuttel of Surfside Beach, S.C., six grandchildren and their spouses; Kimberly (Sam) Brandenburg of Monticello, IL., David (Kate) Beuttel of Quincy, IL., Brandon Beuttel of Gresham, WI., Lauren Beuttel of Gresham, WI., McKenzie Beuttel of Mattoon, IL., Jacob Beuttel of Decatur, IL., five great grandchildren; Collin, Caden, Cohen Brandenburg of Monticello, IL., Adam Beuttel of Quincy, IL. Also surviving are two brothers and sister-in-law; Lowell (Sandra) Beuttel of Godfrey, IL., Leon Beuttel also of Godfrey, IL. After his father passed away, he and his brothers continued with the business, building and remodeling residential homes in the Godfrey/Alton Area. He and his brothers also began 3-B’s Christmas Tree Farm in Godfrey. The brothers loved raising and selling Christmas trees to the many people who enjoyed coming and choosing their special tree. In addition, Merle raised and sold asparagus to customers in and around the area. He also raised and sold pumpkins, gourds and many other species of gourd-like fruit. Besides Christmas trees, pumpkins and gourd, he sold honey from beehives located on his farm. Selling them in the local area and at Heritage Days. He was Past President of the Godfrey Lions Club and was active in it for many years. Merle was a good husband, father, grandfather and brother. “He will be greatly missed”. Visitation will be from 4:00 pm to 7:00 p.m. Thursday, September 9, 2021 at Gent Funeral Home, 2409 State St. Alton, IL 62002. Continuing visitation on Friday, September 10, 2021 at 1:00 p.m. until funeral time at 2:00 p.m. with his grandson, Rev. David Beuttel officiating. Burial at Valhalla Memorial Park. Memorials may be given to American Cancer Society. Online guestbook with additional information may be found at www.gentfuneralhome.com

Godfrey-Merle Lee Beuttel, 81, passed away on Monday, September 6, 2021 at Alton Memorial Rehabilitation & Therapy. Merle was born in Godfrey on February 6, 1940 to the late Eldon and Helen (Stevenson) Beuttel. On February 25, 1961, he married... View Obituary & Service Information

The family of Merle Lee Beuttel created this Life Tributes page to make it easy to share your memories.

Send flowers to the Beuttel family.