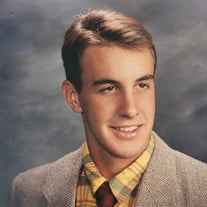 Dateline: Edwardsville Matthew R. Darr, 51, died at 5:10 a.m. Monday, November 29, 2021 at Barnes-Jewish Hospital. Born February 17, 1970 in Alton, he was the son of Brenda (Hale) Darr of Godfrey and the late Lanny Howard Darr. Matt graduated from University of Illinois with a degree in Mechanical Engineering and earned his Master’s degree from Southern Illinois University Edwardsville. He was a consultant for Unico Systems and was formerly chief engineer for Eaton/Cooper Bussman. On June 13, 2008 he married the former Martha Jane Price. She preceded him in death on January 29, 2019. Along with his mother he is survived by two sons, Jacob Darr of Edwardsville and Nicholas Darr of Edwardsville, four brothers, Lanny Darr II of Alton, Joe Darr (Rebecca) of Hoffman Estates, IL, Brad Darr (Tammy) of Montpelier, VA, and Bob Darr (Khamphanh) of Welches, OR. Also surviving are nieces and nephews, Melissa Darr-Either of Silver Springs, MD, Andrew Darr of Montpelier, VA, Lucy Darr of St. Louis, MO, Ben Darr, Luke Darr and Sam Darr all of Hoffman Estates, IL, aunt and uncle, Kaye and Mark Dunbar of Russellville, AL and his former wife, Lori (Fleming) Kampwerth of Aviston, IL. He was preceded in death by his father and his aunt, Charlotte Hunt and uncle, William Hale. Visitation will be from 2:00 p.m. until time of memorial service at 4:00 p.m. Sunday, December 5, 2021 at Gent Funeral Home in Alton. Memorials may be made to the University of Illinois School of Engineering. Online guestbook and information may be found at www.gentfuneralhome.com

The family of Matthew R. Darr created this Life Tributes page to make it easy to share your memories.

Send flowers to the Darr family.