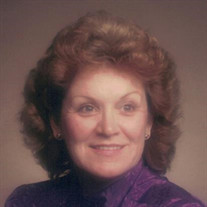 Dateline: Godfrey Mary Louise Richards, 85, died at 12:34 p.m. Thursday, October 29, 2020 at her home. Born July 12, 1935 in Alton, she was the daughter of Edward and Sylvia (Gregory) Hill. Mrs. Richards spent her childhood in Alton and eventually attended Alton High and became a graduate in 1954. She briefly worked at Owens Illinois Glass in Alton and later married, her first husband, enlisted Air Force service man, Hubert Watt. She would eventually have three sons while married to Hubert. The first two while her husband was in the service for four years and the third in 1964. She returned to the St. Louis area in 1958, and by 1963 she found employment at the Olin Corporation in East Alton, IL, where she remained employed until her retirement of 33 years of service. In 1982 she was divorced which would eventually lead to her acquaintance of Jim Richards who became her second husband. Together they built a very nice home in Godfrey, IL where they would live and remain for the rest of their lives. She recently became a widow when her husband preceded her in death on May 5, 2020. Surviving are two sons, Stephen E. Watt of Brighton and Robert E. Watt (Dorothy) of East Alton and step-son, Anthony Richards (Heather); twelve grandchildren, Anthony Watt, David Watt (Robin), Makala Watt, Eric Watt, Cassandra Snively (Eric), Jacob Watt, Tyler Watt, Kristina Ogden, Sean Watt (Kate), Daniel Watt, Michael Richards, Dolton Richards; eleven great grandchildren, and her former husband Hubert Watt of Lake Catatoga. Nephews and one niece, Joey Jenkins and Scott Jenkins, and Michael Issacs and Cathy Issacs. Sister-in-law, Pattie Phillips, and brothers-in-law, Danny Richards, Timothy Richards, and Jeff Richards. Among her parents and husband, she was preceded in death by a son, Anthony R. Watt, a brother, Frank Doomes and a sister Lois Jenkins. First and above all else, Mary never deviated from her role as a dedicated mother. It was always her most important role in life. As a working mom she provided an important second income and her family never had to do without, all the while taking all her duties, all her duties, very seriously. At Winchester (Olin), she was always regarded as a very dependable and conscientious worker because she had an unfailing honest work ethic. Her dedication was never allowed to compromise, her loyalty was always unfettered and true. Her empathy was always uncommonly strong and it would passionately extend to animals even more. She loved them and always felt great despair when they were hurting or being neglected. Her connection with them was often more intense than with humans and she always felt a need to speak and care for them. She always found great joy in their company. She enjoyed the experience of traveling and seeing different places as well as returning to her favorite of destinations, Pensacola, Florida. She was an excellent dancer, loved going out to dinner and then seeing a movie. She had favorite celebrities who were singers, actors, and athletes and she loved astrology and used it to explain the personalities of people. She was at one time a great cook and made a lot of memorable meals in her time and she always looked forward to family gatherings, dinners, and just casual visits. Most of all she enjoyed having a family and just being there for them. She was always loving, honest and caring with her heart always being in the right place. To say that she will be missed will be nothing less than an understatement for she was everything that was good and true. We have only immeasurable gratitude for having experienced such a wonderful person who touched our lives so deeply. Sadness is now ours for now she’s gone and our hearts have been badly broken, we mourn for her loss but take with us the joy of her memory. Gone but not forgotten, she will always live in our minds and stay forever in our hearts. Visitation will be from 4:00-8:00 p.m. Friday, November 13, 2020 at Gent Funeral Home in Alton where funeral services will be at 10:00 a.m. Saturday, November 14, 2020. Burial will be at Valhalla Memorial Park in Godfrey. Memorials may be made to the 5A’s Animal Shelter. Online guestbook and information may be found at www.gentfuneralhome.com

Dateline: Godfrey Mary Louise Richards, 85, died at 12:34 p.m. Thursday, October 29, 2020 at her home. Born July 12, 1935 in Alton, she was the daughter of Edward and Sylvia (Gregory) Hill. Mrs. Richards spent her childhood in Alton and... View Obituary & Service Information

The family of Mary Louise Richards created this Life Tributes page to make it easy to share your memories.

Send flowers to the Richards family.