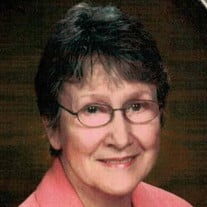 Marlene Alice Hooker, 89, with her family and friends by her side passed peacefully from this earth to be with Jesus on October 4, 2021 while living at Alton Memorial Rehab and Therapy in Alton. She was born in Alton on June 22, 1932. Marlene was the daughter of Emma (Bock) Riley and William Darrell Riley. For the last thirteen years of her life, Marlene lived with the challenging effects of Alzheimer’s Disease all the while she retained her wonderful sense of humor and her sweet smile. Marlene resided her entire life in Alton. She graduated from Alton Senior High School in 1950. Marlene had two best friends from her younger school days, Jean Fisher and Delores Watkins, whom remained life-long dear friends with each other. While attending Alton Senior High School, Marlene worked at her first job making sundaes at Blocks Ice Cream in Upper Alton. After graduation and as an adult she worked for several years at Alton Memorial Hospital in Medical Records. Then later she worked several years for St. Joseph’s Hospital as a Medical Transcriptionist until it closed and finally at St. Anthony’s Hospital as a Medical Transcriptionist until she retired from healthcare. In the later years, occasionally some of Marlene’s co-workers from the past would mention to family members that they used to work with Marlene and that they have many fun memories of sharing lunchtime with her because “it was so much fun to be around her.” During her working years Marlene was also a member of the National Federation of Business and Professional Woman’s Clubs. Marlene embraced the history of the Alton area. She had been an active member and past Regent in Ninian Edwards Chapter NSDAR, National Society Daughters of the American Revolution. Marlene participated in numerous historical activities such as Colonial Days, the yearly Alton Memorial Day Parade, helping others to look up their family ancestry, and other patriotic activities where some of these events she joined with others in the DAR spirit to dress in period clothing. She especially enjoyed attending Naturalization Ceremonies. Marlene felt that her participation in patriotic events was not only for her personal pleasure, but the events help others in the community to strengthen their values in God, our country and the American Flag. Marlene was devoted to God, her family and to her church. From the time of being a little girl she attended Evangelical United Church of Christ. She very much was a part of her church family. As an adult member she participated as a reader in the Sunday service as well as being the minutes/secretary for the Consistory Board Meetings for several years. She also volunteered in various ways that were needed to help with other church activities. She supported her children being involved in the church youth group. When her children were young, Marlene volunteered as the secretary for the Parent Teacher Organization meetings, PTO, for Horace Man Elementary School. She enjoyed the company of her children and friends at an occasional St. Louis Cardinal game, Muny Opera, St. Louis Zoo, spending a day at the beach, playing monopoly, a card game of rummy, and other fun activities. Also later in life, Marlene enjoyed genealogy, listening to local live music at Bethalto’s Rose Garden, drives along the Great River Road on the way to Marquette State Park, traveling and visiting historical sites. She married Billie Charles Rice in 1951. He preceded her in death. Together they had three daughters, Linda Wickenhauser (Jim) of Godfrey, Billie Rice (Rick) of Cuba, MO, and Pamela Wahl of Brighton. On February 28, 1998 she married John H. Hooker, M.D. at the Evangelical United Church of Christ in Godfrey. He preceded her in death on March 10, 2012. She is survived by John’s daughter, Jennifer Hooker of Alton. Also surviving is a brother, Alvin Riley of Jerseyville, her sisters, Vernda Johnson (Lester) of Webster, TX, Emma Greuner (Robert) of St. Louis, MO, and Karen Hohlbauch (Chuck) of Alton, her grandchildren, Tom Wickenhauser (Margaret), Dr. Alan Wickenhauser, Laura Frost (Nathan), Christopher Wahl (Helena), and Kyle Wahl. She is also survived by 12 great-grandchildren and many beloved cousins, nieces and nephews. Marlene was preceded in death by her sisters, Catherine (Riley) Stone, Alvina (Riley) Sheeley, and a brother, Darrell Riley. Visitation will be from 12:00 noon until time of funeral service at 2:00 p.m. Friday, October 8, 2021 at Gent Funeral Home in Alton. Burial will be at Bellefontaine Cemetery in St. Louis, MO. Memorials may be made to H.I.S. Ministry at Evangelical United Church of Christ in Godfrey or the Ninian Edwards Chapter NSDAR in Alton. Online guestbook and information may be found at www.gentfuneralhome.com

Marlene Alice Hooker, 89, with her family and friends by her side passed peacefully from this earth to be with Jesus on October 4, 2021 while living at Alton Memorial Rehab and Therapy in Alton. She was born in Alton on June 22, 1932. Marlene... View Obituary & Service Information

The family of Marlene A. Hooker created this Life Tributes page to make it easy to share your memories.

Marlene Alice Hooker, 89, with her family and friends by her...

Send flowers to the Hooker family.