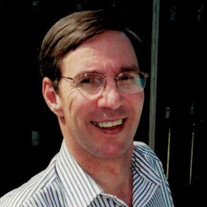 Kenny Roderfeld, 70, of Alton, died peacefully on Monday, August 30. Born June 11, 1951, to Alvin “Slick” Roderfeld and the late Lucille (Pavelek) Roderfeld. He was the oldest of four children. He was a 1969 graduate of Alton Senior High School and played on the 1968 AHS football team with a winning record of 9-0-1. He attended Western Illinois University majoring in architecture until a swimming accident in September 1971 left him paralyzed. A quadriplegic at age 20, he changed his major and graduated from SIUE with a degree in Business Administration and Marketing. In 1979, he received the SIUE Outstanding Young Alumnus award for professional achievement. Despite over 65 rejections at interviews, often due to wheelchair inaccessibility, Kenny was determined to get a job. He kept trying until he was offered a position at First National Bank in Alton in the auditing department and became a computer programmer at their data processing affiliate, MIPCO. He later worked as a program analyst at Mercantile Bank in downtown St. Louis until 2001. Kenny received recognition at each place of business for his outstanding work ethic. Kenny was a determined advocate for individuals with disabilities and was instrumental in working with college officials to obtain wheelchair access with electric doors at SIUE and an elevator at LCCC. He worked closely with Alderman Tony Vambaketes to obtain sidewalk cutouts in Alton. Kenny served as chairman of the board at IMPACT, center for independent living for individuals with disabilities. Kenny enjoyed cheering for the St. Louis Blues and Cardinals. He loved trout fishing trips to Bennett Spring, MO, going to the Alton Little Theater, and playing trivia and Jeopardy with caregivers. Despite his health challenges, Kenny maintained a positive attitude. During his hospitalizations, he always took an interest in the staff asking where they went to school and about their families. He had amazing recall of the stories they shared, even years later. Kenny lived 50 years as a quadriplegic, a testament to the excellent and loving care provided by his parents and family. His family is eternally grateful to his caregivers who became like family, continuing that excellent level of care and compassion. If you were fortunate enough to have crossed paths with Kenny, you know firsthand what a special individual he was and indeed felt blessed to know him. Kenny was an active parishioner at St. Matthew's Catholic Church in Alton and St. Ambrose Catholic Church in Godfrey helping with their auctions by donating sports memorabilia he collected throughout the year. He was a godfather to his cousin Sharon Godfrey, nephew Michael Means, nieces Alicia Orris and Colleen Schoeberle, and family friends Kathleen Wiegand and Amy Pruetzel. Kenny is survived by his father Alvin Roderfeld, three sisters: Pat (Jim) Means, Shirley (Roger Motley) Roderfeld and Joyce (Brian) Semmler; three nieces: Jacquelyn (Tomas Alarcon) Means, Alicia (Max) Orris, Colleen (John) Schoeberle; nephew Shawn (fiancée Bethany Frick) Semmler; a step-niece Roanna Motley, a great-nephew Milo Orris, his aunt Willetta Lundahl and many cousins. Kenny was preceded in death by his mother Lucy Roderfeld and his nephew J. Michael Means. In lieu of food or flowers, the family requests donations in Kenny’s memory be made to IMPACT Center for Independent Living, 2735 E Broadway, Alton, IL 62002; St. Ambrose Catholic Church, 820 W Homer M Adams Pkwy, Godfrey, IL 62035; or an organization of your choice. A private funeral service will be held. A celebration of his life will be held in the spring/summer of 2022 and at that time a :Kenny's Shoe Collection" for all ages, male/female, new walking/running shoes, and gently used walking/running shoes. We will then distribute to area organizations to help those in need. Kenny was always about how I can help others! He will be missed but "he is free again"... Run Kenny Run!! Online guestbook and information may be found at www.gentfuneralhome.com.

The family of Kenneth Leo Roderfeld created this Life Tributes page to make it easy to share your memories.

Send flowers to the Roderfeld family.