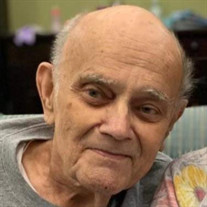 Kenneth N. Edelman passed away peacefully Sunday, March 28, 2021 from natural causes. He was born in Pittsburgh, PA in 1934 to Marian Anette Crooks and Harry R. Edelman II. He was preceded in death by his two brothers Bob and Bud. Ken attended Edgewood High School, and University of Pittsburgh before entering Pittsburgh Theological Seminary. The summer after high school he and his buddies drove around the country seeing the sights. He married Sandra Lee Wood in 1959 and raised three boys in Bradford, PA, Pittsburgh, PA, West Lafayette, IN and Alton, IL. Rich, Mark and Paul share their father’s sense of humor and love of adventure. We loved the many family vacations driving to see grandparents in Pennsylvania, Florida or Arizona with two schnauzers and an uncle, loaded to the brim with camping gear before the age of seatbelts. Ken had many interests, including breeding schnauzers, raising fish (a whole basement full) including siamese fighting fish, ham radio, fixing cars (especially an Austin Healey Sprite). Always keen for science, he had a great medical interest, fixed TVs and built a Van de Graeff generator to entertain the children. He loved helping people and during his ministry worked with many people who benefited from the counseling. He formed youth groups in his churches, in Alton, supporting a well attended event every Friday and Saturday with pool tables, ping pong and foosball games. His career started as an assistant minister in Bradford, PA, then as a minister in Pittsburgh, followed by the opportunity to start a new church in West Lafayette, IN. Finally, he moved to Alton, IL at Elm Street Presbyterian. Ken married Beverly Pyle in 1982 and moved to Grafton, IL. Bev’s large extended family welcomed him with open arms - one big family. Ken and Bev’s retirement years in Grafton were filled with love and laughter with family in and out of the house most days. He and Bev enjoyed riding the scooters all around the Illinois and Mississippi river confluence and back to the cabin on the slough. Ken is survived by his wife Beverly of 38 years, his three sons, Rich (Moira), Mark (Jill) and Paul (Debby) and Bev’s children, Rhonda, Donna, Scott and Jill, 23 grandchildren and 28 great-grandchildren in the one big family. Memorial services will be private. If you wish to make a donation, please consider Oasis Women’s Center in Alton or the Riverbend Humane Society in Jerseyville. Gent Funeral Home in Alton is in charge of arrangements. Online guestbook and information may be found at www.gentfuneralhome.com

Kenneth N. Edelman passed away peacefully Sunday, March 28, 2021 from natural causes. He was born in Pittsburgh, PA in 1934 to Marian Anette Crooks and Harry R. Edelman II. He was preceded in death by his two brothers Bob and Bud. Ken attended... View Obituary & Service Information

The family of Kenneth N. Edelman created this Life Tributes page to make it easy to share your memories.

Send flowers to the Edelman family.