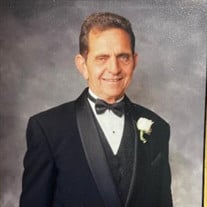 Dateline: Wood River, IL Joseph Paul Puent, 83, died at 3:25 p.m. on Tuesday, June 8, 2021, at his home. He was born February 25, 1938, in West Alton, MO the son of the the late Henry and Julia (Chappius) Puent. Joe retired as director of the Alton Parks and Recreation Department after 26 years of service. While with the City of Alton he was instrumental in the construction of Gordon Moore Park and the Alton Street tree program. He was an avid golfer and enjoyed taking care of the flower beds at Rolling Hills Golf Course for many years. Joe loved celebrating Christmas and was a friend to all he met but his greatest pride and joy was his family. On July 21, 2003, in Alton he married Joann (Volk) and she survives. Also surviving are one daughter, Caroline Fischer (David) of Godfrey, five sons, Daniel Puent (Kris) of Eureka, IL, Ron Puent (Lisa) of Washington, IL, Chuck Puent (Kelly) of Peoria, IL, John Puent of Alton and Mike Puent (Erin) of Dunlap, IL, sixteen grandchildren, eleven great grandchildren and three granddaughters that he raised and considered his second family; Elayni Exton, Erin Riffey and Emily Exton. Also surviving are one brother; Robert Puent of Florissant, MO and one sister; Barbara Hawley of Alton, and a brother-in-law, Don Shrader of St. Peters, MO. He was preceded in death by his first wife, Peggy (Cambron) Puent, one son, Jim Puent and four sisters: Betty Steinhoff, Geraldine Shrader, Edna Lohmeyer and Dotty Spahr. Visitation will be from 9:00 a.m. until time of funeral service at 12:00 Noon on Saturday, June 12, 2021, at Gent Funeral Home in Alton. Burial will be at St. Patrick’s Cemetery in Godfrey. Deacon James Schwartzkopf will officiate. Memorials may be made to the Marquette Principal Mike Slaughter Teachers Scholarship Fund. Additional information and online guest book may be found at www.gentfuneralhome.com

The family of Joseph Paul Puent created this Life Tributes page to make it easy to share your memories.

Send flowers to the Puent family.