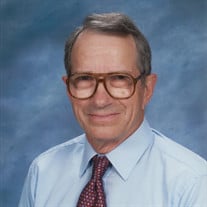 JOSEPH EUGENE HARRIS GODFREY – Joseph Eugene (“Joe” or “Gene”) Harris, 86, passed away Wednesday, December 9, 2020, at his home in Godfrey with family by his side. He was born November 30, 1934, at the Harris family farm in Hickory Valley, Tennessee, to Wiley Lake and Effie Jane (Goddard) Harris, Sr. Following graduation from Grand Junction (TN) High School in 1952, Joe went to work at Sears, Roebuck and Co. in Memphis. In 1955, Joe moved to Alton where he worked 64 years at several companies, including Alcan Ammunition; Owens-Illinois Glass; Cope Plastics; and TheBANK of Edwardsville. He enjoyed working alongside many friends and colleagues over many years, finally retiring at 84. He was baptized in 1960 at the former Central and Madison Church of Christ in Wood River, and was an active member of the Vaughn Hill Church of Christ in Wood River since its inception in 1966. Joe was a veteran of the United States Army Reserves where he served six years (1957-1963). Surviving are his two sons, Michael (Melanie) Harris of Philadelphia, Pennsylvania, and Gregory (Kimberly) Harris of Williamsburg, Virginia; along with seven grandchildren, Lauren, Nathan, Grace, Mary Abigail, Hannah, Macey, and Jack. He is also survived by his good friend and former spouse of 35 years, Joan (McKelvey) Harris. He was preceded in death by his parents and his two brothers, Wiley Harris, Jr., and Richard Harris. Due to COVID-19 restrictions, graveside services will be private at Valhalla Memorial Park in Godfrey. In lieu of flowers, memorials may be made to Vaughn Hill Church of Christ (www.vaughnhill.org) or to Orphan Helpers (www.orphanhelpers.org). Condolences and memories may be shared online at www.gentfuneralhome.com.

The family of Joseph Eugene "Gene" Harris created this Life Tributes page to make it easy to share your memories.

Send flowers to the Harris family.