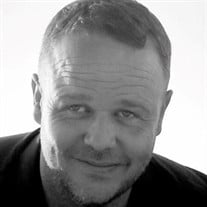 Joseph “Joe” Lee Dodd, a devoted and loving husband, father, brother, son and friend passed away Saturday at his home from natural causes at the age of 41. Born on November 16, 1979, Joe was the son of former Madison County Board Member and Alton Alderman Jim Dodd Sr. and Carol Dodd. Together since High School, he wed Mandi Cupp on July 7, 2007, and was a dedicated husband and father of three. Joe was well-known for his quick wit, loyalty, honesty, moral compass and divergent intelligence. He was admired and respected by all who met him, and loved dearly by his friends and family. With deep adoration for his wife and children, he always put his family first. Following college, he returned to his hometown of Alton where he could spend time with those he loved as he began his career. A 2003 Political Science graduate of Western Illinois University, where he was a member of Phi Kappa Theta fraternity, and a 2009 Public Administration Master's degree recipient from Southern Illinois University at Edwardsville, Joe was employed by Simmons Hanly Conroy Law Firm, where he worked as a Process Server and Courier since 2004. Joe, a 1997 and 1998 Alton Redbirds varsity hockey player, was a steadfast St. Louis Blues fan and calculating Twin Bridges Hockey coach, helping young hockey players not only become better athletes, but also better people. He was a passionate St. Louis Cardinals fan, and delighted in taking his children to games and discussing baseball with his father. His dependable nature and clever presence inspired others and brought joy to many. He will be greatly missed. Joe is survived by his wife, Mandi (Cupp) Dodd, of Roxana; his three children: Layton (11), Ava (8) and Aria (2); his older brother Kenneth “Kenny” Dodd (Melissa), of Alton; and his mother, Carol Dodd, of Alton and mother-in-law, Tracy Tidwell of Wood River. Joe is also survived by his brother-in-law, sisters-in-law and many nieces, nephews, extended family and friends. He was preceded in death by his older brother, James “Jimmy” Dodd, his father James “Jim” Dodd, Sr. and father-in-law Bennie Tidwell. In celebration of Joe’s life, a visitation will be held from 4:00 p.m.-7:00 p.m. on Friday, October 1, 2021 at Gent Funeral Home in Alton where funeral services will be held at 10:00 a.m. on Saturday, October 2, 2021 Burial will be private. Memorials may be donated to the Family for the Children’s Trust Fund. Online guestbook and information may be found at www.gentfuneralhome.com

Joseph &#8220;Joe&#8221; Lee Dodd, a devoted and loving husband, father, brother, son and friend passed away Saturday at his home from natural causes at the age of 41. Born on November 16, 1979, Joe was the son of former Madison County Board... View Obituary & Service Information

The family of Joseph "Joe" Dodd created this Life Tributes page to make it easy to share your memories.

Send flowers to the Dodd family.