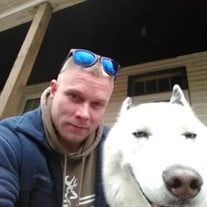 John Paul (J.P.) Weber passed away suddenly in Alton, IL on Monday, July 5, 2021. J.P. was born May 23, 1981 to John B. Weber and Marian (Susie) S. Thompson. He was a 1999 Graduate of Marquette Catholic High School in Alton, IL. His best friend in the world was his faithful dog Odin who will miss him dearly. J.P. loved listening to music, cooking, a variety of sports, skateboarding, dirt bike riding, nature, walking the neighborhood with his dogs, fishing, and enjoyed spending time with friends and family. As a youth he was a Champion soccer player. He is preceded in death by his Grandparents Harry Weber, Delores Kuhn, and John and Carol Thompson. He is survived by his father, John Weber; his mother, Susie Thompson; his brother and sister in law, Jake (Brittney) Weber; his brother, Brian Weber; his nephews, Owen and Jordan and nieces Arlynn, Autumn and Brylee whom he held a special place in his heart. He is also survived by numerous aunts, uncles, and cousins. J.P. had his struggles in this life and can now rest in peace. A private burial will take place and a future memorial gathering will be announced at a later date. Gent Funeral Home is in charge of arrangements. In lieu of flowers, memorials may be made to the family in care of Gent Funeral Home. Special thanks to all family and friends who have reached out to during this difficult time.

The family of John Paul (J.P.) Weber created this Life Tributes page to make it easy to share your memories.

Send flowers to the Weber family.