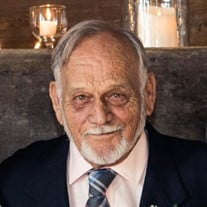 Dateline: Alton John William Holland, 81, died at 8:59 a.m. Thursday, May 28, 2020 at Alton Memorial Hospital. Born December 18, 1938 in Alton, he was the son of John M. and Mary Frances (Cannon) Holland. Mr. Holland served with the Army during the Korean War and retired from Illinois Bell Telephone Company. He enjoyed golfing and bowling. Surviving is a daughter, Julie Tieman of Granite City, a son, Kevin Holland of Las Cruces, New Mexico, four grandchildren, LeeAnn Harris (Jon) of Godfrey, Holland Tieman of Bethalto, J.D. Mathews of Litchfield, and Sgt. Conner Mathews stationed with the U.S. Army in Hawaii, one great grandchild, Phoenix Mathews. Also surviving are two sisters, Delores Copley of Godfrey and his twin sister, Joan Ford of Wood River, and numerous nieces and nephews. Along with his parents, he was preceded in death by a son, Kelly M. Holland, and five sisters, Gloria Holland, Oldean Holland, Kathleen Roades, Charlotte O’Hara, and Shirley Frakes. Private graveside services will be held at Upper Alton Cemetery with full military honors by the VFW Post 1308. A celebration of life service will be held at a later date. Memorials may be made to a charity of choice. Gent Funeral Home in Alton is in charge of arrangements. Online guestbook and information may be found at www.gentfuneralhome.com

The family of John William Holland created this Life Tributes page to make it easy to share your memories.

Send flowers to the Holland family.