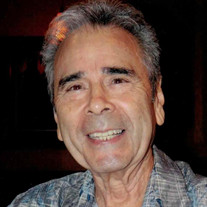 Dateline: Alton John Richard Hernandez, 89, died at 6:12 p.m. Monday, November 29, 2021 after a short battle with bladder cancer. Born November 18, 1932 in Alton, he was the son of John R. and Verna Mae (Andrus) Hernandez. Mr. Hernandez served in the U.S. Army during the Korean War. He worked for the Alton Fire Department for 11 years before becoming a musician for many years. He played all over St. Louis including Top of The Tower for eight years, 11 years at the Alton Eagles, Senior Services Plus (SSP) and many other places. He was a member of the VFW Post 1308 and the St. Louis Assembly Knights of Columbus. Surviving are his children, grandchildren, and great grandchildren, and numerous nieces and nephews. Also surviving are his siblings, Mary Harris, Leonard Hernandez (Marie), Robert L. Hernandez (Carolyn), James “Jim” Hernandez, Trina Hurley (Ed), Joseph “Joe” Hernandez (Jill Gauf), Rita Ortman (Terry), Larry Hernandez (Kathy), Christina Hernandez, Judy Simpson (Don), and Anita Lynn (Harold). He was preceded in death by his brother-in-law, JT Harris and a sister-in-law, Helene Hernandez. Visitation will be from 4:00-7:00 p.m. Monday, December 6, 2021 at Gent Funeral Home in Alton. A Memorial Mass will be held at 10:00 a.m. Tuesday, December 7, 2021 at St. Mary’s Catholic Church in Alton. Father Ben Unachukwu, OMV will officiate. Burial will be at St. Joseph’s Cemetery with full military honors. In lieu of flowers, memorials may be made to St. Mary’s Catholic Church or The BackStoppers. Per his wishes cremation rites were accorded. The family would like to express their thanks to the team at OSF St. Anthony’s Hospice and to the staff at Jerseyville Nursing and Rehab for his care. The Online guestbook and information may be found at www.gentfuneralhome.com

The family of John Richard Hernandez created this Life Tributes page to make it easy to share your memories.

Send flowers to the Hernandez family.