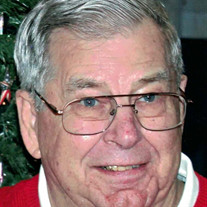 Dateline: Alton John H. Godar, 91, died at 2:45 a.m. Sunday, October 17, 2021 at Alton Memorial Hospital. Born April 20, 1930 in Calhoun County, he was the son of John Edward and Anna Marie (Ewen) Godar. He graduated from Marquette Catholic High School, class of 1948. Mr. Godar served in the U.S. Army during the Korean War and was a member of St. Mary’s Catholic Church in Alton. In 1984 he was inducted into the Illinois Fast Pitch Softball Hall of Fame. He was a member of the Knights of Columbus, Alton VFW Post 1308, and the American Legion. He retired from the Illinois Department of Transportation after 35 years of service. On July 21, 1951 he married the former Blenna M. Nowlan at St. Patrick’s Church in Alton. She preceded him in death on May 17, 2021. Surviving is a son; Gary Godar (Beth) of East Alton, a daughter; Blenna Hendricks (David) of Jerseyville, eight grandchildren; Angie Mignery, Christopher Godar, Matthew Long, Nathan Long, Michael Godar, Steven Godar, Jennifer Neal and Zach Godar, and several great grandchildren. Also surviving is a brother; Neil Godar and three sisters; Betty Spahr, Kathy Schneider, and Jannie Molloy. Along with his wife, he was preceded in death by a son; Terry Godar, three sisters; Mary Ellen Yaeger, Joyce Zerr and Carol Cannella and an infant brother, Kenneth. Visitation will be from 4:00-8:00 p.m. Thursday, October 21, 2021 at Gent Funeral Home in Alton. A Mass of Christian burial will be at 10:30 a.m. Friday, October 22, 2021 at St. Mary’s Catholic Church in Alton. Burial will be at St. Patrick’s Cemetery in Godfrey with full military honors. Memorials may be made to Marquette Catholic High School. Online guestbook and information may be found at www.gentfuneralhome.com

The family of John H. Godar created this Life Tributes page to make it easy to share your memories.

Send flowers to the Godar family.