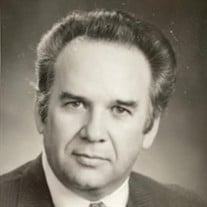 John W. Carpenter Jr., 84, died at 11:09 p.m. Monday, March 21, 2022 at his home in Godfrey. Born January 23, 1938 in Calhoun County, IL, he was the son of John W. Carpenter Sr. and Lorraine (Hazelwonder) Carpenter. Mr. Carpenter served in the Army Reserves and retired as Vice President of Millers Mutual in Alton. He was a member of the Jerseyville Moose and a longtime member and past president of the Alton Lions Club. He coached Godfrey Khoury League for six years. On July 21, 1962 he married the former Sandra Shortal in Jerseyville. She survives. Also surviving is a son, John W. Carpenter III and his wife Paula of Mattoon, IL, a daughter, Carrie Dellamano and her husband Clif of Troy, IL, four grandchildren, Nathan, Daniel and Matthew Carpenter, Cortlan Dellamano, and two step-grandchildren, Jordan Dellamano (Sydni) and Devin Dellamano. He is also survived by two sisters, Anna Mae Heavner of Godfrey and Alice Adams (George) of Godfrey, two brothers-in-law, Pat Shortal (Jackie) of Jerseyville and Sylvester Sievers of Godfrey. Along with his parents, he was preceded in death by a brother, Gary Carpenter and a sister, Emma Sievers. No services are scheduled. Memorials may be made to the 5A’s Animal Shelter. Gent Funeral Home in Alton is in charge of arrangements. Online guestbook and information may be found at www.gentfuneralhome.com

The family of John W. Carpenter Jr. created this Life Tributes page to make it easy to share your memories.

Send flowers to the Carpenter family.