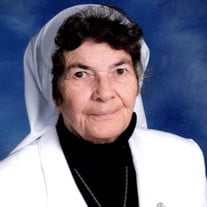 Sister Joan Ann Springman, OSU, died peacefully at 11:45 a.m. on Sunday, April 18, 2021. She was born on Feb. 24, 1934, at her home in Alton, Illinois; the youngest of eight children of Joseph J. and Elizabeth (Valerius) Springman. She had five brothers, Jerome V., Eugene E., Gerald J., Edmund J. and Joseph J.; and two sisters, Mary L. Girard and Delores T. Mills, all, of whom preceded her in death. At the age of 19, she entered the Ursulines on July 15, 1953, and professed her vows on Jan. 16, 1956, when she became known as Mother Mary Immaculata. She knew she wanted to be "a religious" from the time she was in the second grade. She earned a bachelor's degree in voice from Webster College in St Louis, Missouri, and a master’s degree in liturgical music, with concentration in pipe organ, from DePaul University in Chicago, Illinois. She taught kindergarten and elementary grades--and music to students of all ages--throughout the Central Province, serving in Alton, Collinsville, and Oak Park, Illinois; Kirkwood, Missouri; New Orleans, Louisiana.; and Frontenac, Minnesota. She also was an organist, choir director, and music and liturgy coordinator. She taught music at Marquette High School and Consolidated Catholic School in Alton from 1973-75. She was music and liturgy coordinator at SS. Peter and Paul in Alton from 1991-93 and at SS. Peter and Paul in Collinsville from 1993-2001. She most recently lived at St. Agnes Home in Kirkwood, Missouri. Throughout her life, Sister Joan Ann was well known for her superior organ skills and beautiful voice. One of her favorite songs to sing, the "Ave Maria," would bring one to tears. Sister Joan Ann was known and loved by every one of her nieces and nephews. Becoming the last surviving sibling in the fall of 2004, she became, in many ways, "the glue" that kept the family connected through her handwritten letters, emails, religious holiday cards and birthday cards. Visitation will be Sunday, April 25, 2021 from 4:00-7:00 p.m. at Gent Funeral Home in Alton. A Mass of Christian Burial will be conducted at 10:00 a.m. Monday, April 26, 2021 at SS Peter and Paul Catholic Church with Father Jeff Holtman O.F.S. as celebrant. Burial will follow at St Patrick's Cemetery. Memorial gifts for ministry to the poor may be made to the Ursuline Sisters, 353 S. Sappington Road, St. Louis, MO 63122. Online guestbook and information may be found at www.gentfuneralhome.com

Sister Joan Ann Springman, OSU, died peacefully at 11:45 a.m. on Sunday, April 18, 2021. She was born on Feb. 24, 1934, at her home in Alton, Illinois; the youngest of eight children of Joseph J. and Elizabeth (Valerius) Springman. She had five... View Obituary & Service Information

The family of Sister Joan Ann Springman created this Life Tributes page to make it easy to share your memories.

Send flowers to the Springman family.