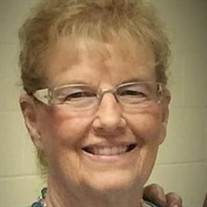 Dateline: Oakland, TN Janet Lee Allen, 78, of Oakland, TN, formerly of the Alton area, died at 12:12 a.m. Wednesday, Dec. 29, 2021 in Alton. Janet was visiting her daughters in Illinois when she was hospitalized and spent the next 27 weeks in numerous medical facilities. She had a long, hard nine-month battle, remaining positive and fighting more than anyone can imagine with her two daughters by her side. Janet will be so deeply missed by her daughters, husband, family, friends and all who knew and loved her. Born Oct. 15, 1943, in Clarinda, Iowa, she was the daughter of the late Max and Alice (Hamm) Snodderly. She married Joe Allen of Jerseyville, November 1988 in Alton. He survives in Oakland, TN. Janet moved from Iowa to the Alton area and worked at St. Joseph's Hospital, Jones Intercable, TCI Cablevision and then as executive secretary for Adams Development Co. until she married Joe and moved to Germany for his job. While in Germany, Janet enjoyed traveling the country, Volksmarching (hiking) and shopping. They returned to the States after two years and settled in the southwest area of Tennessee. First living in Collierville, where she worked for Meadow's Construction, they then moved to Pinson, where they both semiretired and became involved in the Parkway Christian Auto Club where Janet served as the secretary/treasurer. After more than 20 years taking care of their resort-like property, it was time to downsize and they moved to Oakland, TN. Janet loved her family above all but also loved to sew and made several unique quilts and her daughters clothes when they were young. She enjoyed cooking, flower gardening, working on jigsaw puzzles, genealogy, Facebook, and her I-pad. In addition to her husband, Joe, she leaves behind daughters Debbie Simmons (Steve) of Godfrey, IL, Dede Snyder (Rick) of Alton, IL and an “adopted” daughter Heather Bishop of Tennessee; two brothers and their families, Jim Snodderly (Jody) of Texas and Steve Snodderly (Lisa) of Oregon; Joe's daughters and their families, Karina (Dean) of Florida, Deana of Springfield, IL, Tamara (Andy) of Brighton, IL and Rachel (Mike) of Florida. She is also survived by mother-in-law Bernice Allen, brother-in-law Randy, sister-in-law Ann all of Meredosia, IL, and brother-in-law Mike (Sherry) of Brighton, IL; five bonus grandkids, Zach and Nate, Holly and Hunter and Ragen, cousins and many friends in Tennessee, Illinois and Iowa. In addition to her parents, she was preceded in death by her father-in-law the Rev. Lloyd Allen, brother-in-law Fred Atwood and Heather's husband, Terry Bishop. Per her wishes, cremation rites were accorded. A memorial service and celebration of her life will be held later this year in Tennessee. Please share memories and stories with the family in the online guestbook at www.gentfuneralhome.com. Janet was diagnosed with Parkinson's Disease about nine years ago. Memorial donations may be made to the Michael J. Fox Foundation for Parkinson's Research at www.michaeljfox.org or mailed to Donation Processing, The Michael J. Fox Foundation, P.O. Box 5014, Hagerstown, MD 21741-5014. Donations can also be made to the Disabled Veterans or a Charity of ones choice.

Dateline: Oakland, TN Janet Lee Allen, 78, of Oakland, TN, formerly of the Alton area, died at 12:12 a.m. Wednesday, Dec. 29, 2021 in Alton. Janet was visiting her daughters in Illinois when she was hospitalized and spent the next 27 weeks... View Obituary & Service Information

The family of Janet Lee Allen created this Life Tributes page to make it easy to share your memories.

Send flowers to the Allen family.