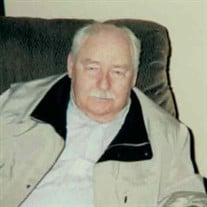 Dateline: Alton James “Edward” Winslow, 89, died at 7:41 a.m. Sunday, February 27, 2022. Born November 7, 1932 in Alton, he was the son of Walter and Katherine (McElroy) Winslow. Mr. Winslow served in the U.S. Army airborne division as a paratrooper and also served with U.S. Marine Corps. He was a member of the American Legion in Alton and the NRA. He owned Granny’s Time in Alton and was a flight instructor and worked in sales for Walston Aviation. He retired in 1985 as a switchman for Illinois Terminal/Norfolk & Southern. He married Shirley Gaither on February 5, 1955. She preceded him in death on October 5, 2000. He married Hazel Bettilyon on June 15, 2002 in Alton. She survives. Also surviving are three daughters, Joyce Bowman of Alton, Margaret Haworth (Jonn) of Wood River, and Catherine Curtis (Rob) of Godfrey, a son, James “Michael” Winslow of Alton, his step-children, Franklin Castle (Robin), Wayne Castle (Judy), Michael Castle, Lewis Castle, Marilyn Leonard, Rosalind Drury (David), seven grandchildren, 11 great grandchildren, 10 step grandchildren and 8 step great grandchildren, a sister, Margaret Summers of Alton, and a sister-in-law, Vivian Winslow. Along with his parent and first wife, he was preceded in death by brothers, Virgil, Charles, Robert and Kenneth Winslow, and sisters, Mary Deitz, Barbara Winslow, Charlotte Smith and Shirley Alice Winslow. Visitation will be from 1:00 p.m. until time of funeral service at 4:00 p.m. Saturday, March 5, 2022 at Gent Funeral Home in Alton. Burial will be at a later date at St. Patrick’s Cemetery in Godfrey. Memorials may be made to a charity of choice. Online guestbook and information may be found at www.gentfuneralhome.com

The family of James "Edward" Winslow created this Life Tributes page to make it easy to share your memories.

Send flowers to the Winslow family.