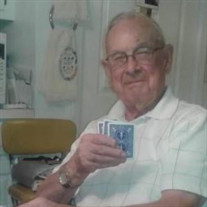 Dateline: Wood River James Jolly, 98, passed away Sunday, December 26, 2021 at John Cochran VA Medical Center in St. Louis, MO. He was born in White Hall, IL on June 27, 1923, the son of James and Sally (McCoy) Jolly. Jolly married Ruth Day in 1942 at the Baptist Church in East Alton. They shared 68 years of marriage. Jim answered the call of his country to serve in the Army at age 19 in 1943. He was assigned to the 182nd Company of the 42nd Replacement Battalion. Before he was recruited for the Army, he was a meat cutter at Alfeld Grocery in Carrolton. The Army trained him as a cook. His expertise as a cook was appreciated by hundreds of soldiers who stood in line for a hot meal on their way to the battlefield. When the war ended in 1945 he came home to a happy reunion with his wife, Ruth, in Wood River where he has lived since 1954. After his service in the Army, he worked at Walters Market in Wood River for 16 years and National Food Store as a meat cutter for 26 years. He was a member of the First Baptist Church in East Alton, a member of the Wood River VFW Post 2859 since 1954, and served as President of the Wood River Seniors. He and Ruth enjoyed many years of square dancing and traveling. His favorite past time was playing cards with Jan and Kay, Mark and Darla! Still winning at age 98! A highlight of his life was an Honor Flight visit in 2010 to see the World War II memorial in Washington D.C. In addition to his parents, he was preceded in death by his wife, Ruth, daughter, Linda Lee Jolly Waters, granddaughter, Amy Heather Waters, sister, Pearl, a special family friend, Ken Owens, and many nieces and nephews. Visitation will be from 12:00 noon until a time of celebration of Jim’s life at 1:00 p.m. Monday, January 3, 2022 at Gent Funeral Home in Alton. Burial will be at Rose Lawn Memory Gardens in Bethalto. Memorials may be made to Honor Flight. Online guestbook and information may be found at www.gentfuneralhome.com

The family of James Jolly Jr. created this Life Tributes page to make it easy to share your memories.

Send flowers to the Jolly family.