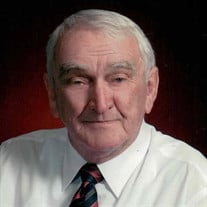 Fred L. Seymour, 88, passed away peacefully with his family by his side, on October 31,2021 at St Anthony’s Hospital. He was born on March 7, 1933, the seventh child of eight to Dwight and Georgia Seymour of Jacksonville, Illinois. He owned/operated a home improvement business for many years, Fred Seymour & Sons where he proudly worked beside all four of his children, grandchildren and wife Susie. He enjoyed attending sporting events of his grandchildren and great grandchildren. He was a long time member of Messiah Lutheran Church in Alton, Illinois. He enjoyed cooking, eating and a good dessert. On November 22, 1951 he married his high school sweetheart Elizabeth “Susie” Deem in Jacksonville Illinois. Together they shared 53 years of marriage until her passing on July 2, 2005. He then married Rebecca Sarich on December 23, 2017, she survives. Although their time was short, he enjoyed having her as his wife, spending time on their deck. He is survived by three children, Dwight (Debbie) Seymour of Brighton, Betsy (Bob) Heiens of Dow, Lisa (Randy) Ebbeler of Brighton and one daughter-in-law Jane Seymour of Medora and three step-children John (Jackie) Sarich, Kelly (Brynn) Kincheloe and Kim (Ken) Hartung. Also surviving are nine grandchildren, Shawn and Patrick Seymour, Matthew, Christopher, Michael and Nichole Seymour, Bryan Bechtold, Quinton and Grant Ebbeler, and ten step- grandchildren, Adam and Melissa Heiens, Katie and Karah Hartung, Thomas, Jacob, Gina and Bryndon Kincheloe, and Gabriel and Ruby Sarich and twenty great grandchildren. He is survived by his sister Betty Clarkson, sisters-in-law Ruth Seymour, Alberta Seymour and Edie Seymour and many nephews and nieces and his special friend Jack Weber. He is preceded in death by his wife Susie Seymour, son John Seymour, his parents, and six siblings. A private memorial service will be conducted at a later date. Memorials may be given to “Sleep in Heavenly Peace” a non-profit organization that builds, assembles and delivers beds to children and families in need. A very special thank you to the nursing staff at St Anthony’s ICU for their kindness and compassion especially Chris who went beyond what anyone could ever ask for. Our family thanks you and will keep you in our hearts forever. Gent Funeral Home in Alton is in charge of arrangements. Online guestbook and information may be found at www.gentfuneralhome.com

Fred L. Seymour, 88, passed away peacefully with his family by his side, on October 31,2021 at St Anthony&#8217;s Hospital. He was born on March 7, 1933, the seventh child of eight to Dwight and Georgia Seymour of Jacksonville, Illinois. He... View Obituary & Service Information

The family of Fred L. Seymour created this Life Tributes page to make it easy to share your memories.

Fred L. Seymour, 88, passed away peacefully with his family by...

Send flowers to the Seymour family.