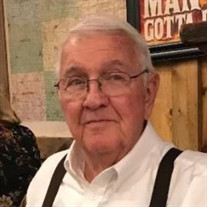 Dateline: Alton Ford J. Green, 90, died at 9:36 p.m. Tuesday, May 10, 2022 at Cedarhurst of Bethalto. Born August 6, 1931 in Alma, Michigan, he was the son of Frieda Clark Green and Ford Joseph Elias and his step-father, Wilfred Theodore Green. He married the former Colleen Winders on October 16, 1951 in Salem, IL. She preceded him in death on April 3, 2018 after 67 years of marriage. Surviving are four children and their spouses: Lisa and Kirk Huber, Ellen and John Sowders, Julia and Chris Jeffreys, and John and Terrah Green, nine grandchildren, Matt and Karin Witt, Kate and Dennis Ellis, Chris Witt and fiancé Erica Allen, Amanda McDonald, Andrew Huber, Nick Schaper, Lexi Green, Michael Green, Logan Sowders, and 7 great grandchildren, Brady McDonald, Abigail McDonald, Patrick Riney, Eva Riney, Ashlyn Witt, Arya Schaper, and Claire Witt. Along with his parents and wife, he was preceded in death by three brothers, John Jack Rowell, Robert Green and William Green and a sister, Yvonne Lee Smeeton. Mr. Green served in the U.S. Air Force as a radio instructor and 15 years in the Army Reserves Signal Corps as a captain. He worked 38 years for Illinois Bell and Ameritech starting by connecting small, independent companies to the long-distance network and retiring as switching manager for the 618 area. Ford enjoyed hunting, fishing, reading, traveling, family and food. He and his wife, Colleen, volunteered at many organizations in the Alton/Godfrey area. Together they ran the All God’s Children Shall Have Shoes program for many years. They helped start the Khoury League in Godfrey and were still involved when it was converted to Godfrey Park and Rec. There is a ball field named after him. Both volunteered at Alton Memorial Hospital and Heritage Days for many years. He helped start PeeWee football in Godfrey. Ford received many honors, including ones from The Illinois Association of Park Districts, The Pioneers of America, Emergency Medical Services for Children, and The Jeffersonian Award for Volunteers presented in Washington D.C. The family would like to thank the staff at Cedarhurst in Bethalto and VITAS Hospice for all their loving care. Visitation will be from 10:00 a.m. until time of service at 11:30 a.m. Friday, May 13, 2022 at Gent Funeral Home in Alton. Tim Sandifer will officiate. Burial will be private with full military honors. Memorials are preferred to flowers. All God’s Children Shall Have Shoes and Godfrey Park and Rec are suggested. Online guestbook and information may be found at www.gentfuneralhome.com

The family of Ford J. Green created this Life Tributes page to make it easy to share your memories.

Send flowers to the Green family.