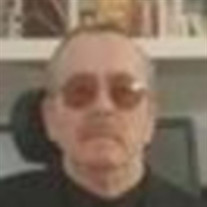 Dateline: Alton Everett Deon Banks, 70, died at 9:19 a.m. Friday, April 2, 2021 at his home in Alton. Born September 29, 1950 in Elizabeth Town, IL, he was the son of Ethel (Fulcher) Banks of Bethalto and the late Everett Gene Banks. Mr. Banks served in the U.S. Air Force in Vietnam. He retired from Challenge Unlimited as a supervisor. On October 12, 1984 he married the former Delores Ann (Shuttleworth) Ruyle in Alton. She survives. Along with his mother and wife, he is survived by a son, Scott Banks (Ginny) of Baltimore, MD, a stepson, Joseph Ruyle (Mary) of Alton, a daughter-in-law, Christine Ruyle of Jerseyville, six grandchildren, Raymond and Anne Banks, James, Joseph, Matthew and Jennifer Ruyle, three great grandchildren, Jayden, Landon, and Colton Ruyle. He is also survived by two brothers, Eric and Justin Banks and a sister, Linda Light. Along with his father, he was preceded in death by a stepson, Robert Ruyle and a sister, Nancy Bailey. Visitation will be from 5:00-8:00 p.m. Tuesday, April 6, 2021 at Gent Funeral Home in Alton where funeral services will be at 10:30 a.m. Wednesday, April 7, 2021. Burial will be at Jefferson Barracks National Cemetery in St. Louis, MO. Memorials may be made to the Paralyzed Veterans of American, Chapter 11 St. Louis, MO. Online guestbook and information may be found at www.gentfuneralhome.com

The family of Everett Banks created this Life Tributes page to make it easy to share your memories.

Send flowers to the Banks family.