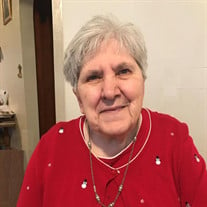 EVELYN T. WARD Alton- Evelyn “Evie” Theresa Ward, 88, of Alton passed away peacefully at Riverside Rehab and Healththcare in Alton, Illinois on Friday, May 22,2020 at 8:34pm. She was born on October 30, 1931 at home in Godfrey, Illinois, daughter of the late Joseph A. and Elizabeth (Manns) Wegener. She married Harold W. Ward on February 19, 1982. He preceded her in death on July 30, 1984. She is a graduate of Marquette Catholic High School. She worked and helped her parents with asparagus farming then worked as a cook at Grabner’s Inc. She enjoyed fishing and was an avid bowler. She was a lector at St. Matthew’s Catholic Church for many years. She also enjoyed helping others. She was kind to everyone. She is survived by two sisters and a brother-in-law, Margaret Klunk and Lorene (Richard) Melton, and one brother and sister-in-law, Joseph E. (Agnes) Wegener, and her special niece and goddaughter, Therese Macias, as well as numerous other nieces and nephews whom she loved very much. Besides her parents and late husband, she was preceded in death by a brother-in-law, Donald Klunk, and two sisters and brothers-in-law, Dorothy (Francis) Nordyke, and Betty (Jack) Maher. Private arrangements and Mass will be celebrated on Thursday, May 28, 2020. Burial will take place at St. Patrick’s Cemetery in Godfrey. Gent Funeral Home in Alton is in charge of arrangements. In lieu of flowers, memorials can be given to Masses, to St. Ambrose Catholic Church, or to Madison County Catholic Charities. Online guestbook and information may be found at www.gentfuneralhome.com

The family of Evelyn "Evie" Ward created this Life Tributes page to make it easy to share your memories.

Send flowers to the Ward family.