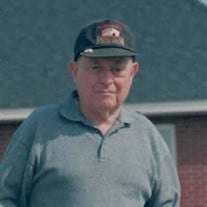 Eugene E. Lewis, 95, died at 3:49 a.m. Tuesday, December 28, 2021 at his home in Alton. Born October 7, 1926 in New Orleans, LA, he was the son of Eugene E. and Etta (Martin) Lewis. Mr. Lewis served with the U.S. Army in the Philippines during WWII. He was a life time member of the VFW Post 1308 and a member of the Alton Eagles Club. An avid golfer, he had 9 holes in one and was a member of the Alton Golf Hall of Fame. He retired as a dispatcher in the shipping department at Owens Illinois Glass in Alton after 41 years of service. On May 6, 1949 he married the former Bette Allsman in Alton. She preceded him in death. Surviving is a daughter-in-law, Jeana Carsten Lewis, a grandson, Mike Lewis (Natalie) of Alton, two grandchildren, Brittani Melton (Damon) and Allison Lewis, four great grandchildren, Addison Melton, Emma Melton, Cason Lewis, and Colton Lewis, cousins, Leroy Trappy and Gloria Bland and numerous nieces and nephews. Along with his parents and wife, he was preceded in death by two sons, Ronald Lewis and Richard A. Lewis. Visitation will be from 9:00 a.m. until time of funeral service at 11:00 a.m. Thursday, December 30, 2021 at Gent Funeral Home in Alton. Burial will be at Rose Lawn Memory Gardens in Bethalto with full military honors. Memorials may be made to St. Jude Children’s Research Hospital. Online guestbook and information may be found at www.gentfuneralhome.com

The family of Eugene E. Lewis created this Life Tributes page to make it easy to share your memories.

Send flowers to the Lewis family.