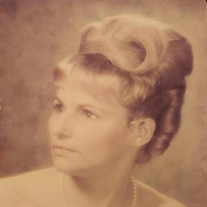 ERIKA SCHUTTE (Leipold), age 91, of Collinsville Illinois passed away Monday April 18, 2022. Erika was born to Teresa and Hans Leipold on September 16, 1930 in Nürnberg, Germany. Her stories of growing up during WWII could bring a tear to the most stoic. She said the best day of her young life was seeing the American parachutes opening overhead, signaling an end to the war. Erika married Ed (Clarence) Schutte, an American Army solider, in 1954 and they came to the U.S. to raise a family in the Metro East. She worked most of her life taking care of others as a Certified Nurses Aid until the age of 74. In retirement she enjoyed the company of family and friends, staying up on current events and spending hours on the phone or watching television. She will be remembered for her feisty spirit, appreciation of German treats, and deep love for her family. Erika was a beloved Mother, Grandmother, Great Grandmother, Sister, Aunt, and friend. She had five children: Gala Dagostino, Silvia Sumner, Jerry (Barb) Schutte, Dave (Mitzy) Schutte, and Donna Friedman. Grandchildren include Robin (Sebastian) Richert, Ryan Schutte, Charlie Schutte, Suzie Schutte, Nicolette (Marshal) Brooks, Krista Friedman, Melissa (Rich) Catlett, Jessica Schutte, Christopher Schutte, Dawn Wreath, Shawna Pacewic, Ed Gordon, and Kristy Dagostino. She had many great grandchildren. She was proceeded in death by her Mother and Father, brother Heinz and sister Renata Zarb, and daughters Gala and Silvia. At her request no funeral or viewing will be held. The family would like to express our sincere thanks for wonderful help and care given by the Nurses at Oliver Anderson Hospital. If desired, friends can make contributions to the American Heart Association. Gent Funeral Home is in charge of arrangements. www.gentfuneralhome.com

ERIKA SCHUTTE (Leipold), age 91, of Collinsville Illinois passed away Monday April 18, 2022. Erika was born to Teresa and Hans Leipold on September 16, 1930 in Nürnberg, Germany. Her stories of growing up during WWII could bring a tear to the... View Obituary & Service Information

The family of Erika Schutte created this Life Tributes page to make it easy to share your memories.

Send flowers to the Schutte family.