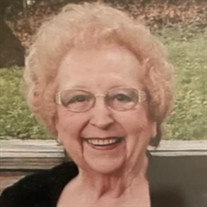 Dateline: Alton Edith K. “Edie” Ventimiglia, 97, died at 9:03 p.m. Sunday, March 27, 2022 at her home. Born March 22, 1925 in Eldorado, IL, she was the daughter of Leonard and Blanche (Patton) Ford. She married Anthony “Tony” Ventimiglia on April 15, 1944 at St. Patrick’s Catholic Church in Alton. He preceded her in death on August 7, 2021. Edie worked for Laclede Steel and then went on to open Tony’s Restaurant in downtown Alton with her husband in 1954 where she worked until the time of her retirement. Surviving is a son, Michael Ventimiglia of Alton, four grandchildren, Paul Ventimiglia (Erin), Betsy Bechel, Shawna Ventimiglia, and Leonard Ventimiglia III, 10 great grandchildren, and a brother, Lloyd Ford. Along with her parents and husband, she was preceded in death by a son, Leonard Ventimiglia, two brothers, Frank and Bob Ford and a sister, Sybil Collins. Visitation will be from 12:00 noon until time of funeral service at 1:00 p.m. Wednesday, March 30, 2022 at Gent Funeral Home in Alton. Burial will be at Valhalla Memorial Park in Godfrey. Memorials may be made to the American Heart Association. Online guestbook and information may be found at www.gentfuneralhome.com

The family of Edith K. "Edie" Ventimiglia created this Life Tributes page to make it easy to share your memories.

Send flowers to the Ventimiglia family.