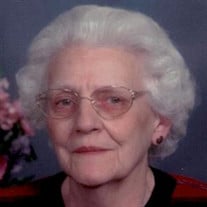 Dateline: Alton Edith L. Dorsey, 93, died at 9:44 a.m. Wednesday, October 7, 2020 at Riverside Rehab and Health in Alton. Born December 27, 1926 in Hardin, IL, she was the daughter of Charles and Mary (Woelfel) Schleeper. She married Ralph E. Dorsey on May 29, 1948 at St. Patrick’s Church in Alton. He preceded her in death on August 24, 1999. Edith worked in the Corrugating Department of Owens Illinois until deciding to become a full time mother. Later, she worked and retired from J. C. Penney in 1991. Edith or “Edie” as she was affectionately known to family and friends was quite a seamstress and had a knack for creating quilts. She resided at Cedarhurst Assistant Living until her death. Along with her parents and husband, Edith was preceded in death by an infant son, James and two infant granddaughters, Laura and Karen Cunningham. Also preceding her in death were her sisters, Sister Mary Paula Schleeper, Helen Barry, Edna Mae Dover, Catherine Turpin and Rita Davis, brothers, Aloys and Joseph Schleeper. She is survived by her children, Donna (Brad) Cunningham of Little Elm TX, Karen (Al) DeGrand of Alton, Barbara (Brian) Murphy of Godfrey, and Mark (Doe Ann) Dorsey of Pike Road, AL. She is also survived by her grandchildren, Erin (Roy) Henry, Al (Erin) DeGrand, Dr. Michael DeGrand, Rachel (Ed) Chinchilla, Bridget (Chris) Lippmann, Michael (Hali) Murphy, Elizabeth Murphy, Nathan DeGrand, Steven and Samantha Dorsey and Alexis (Derrick) Bohannon. She was blessed with nine great grandchildren. A private Mass will be held at St. Ambrose Catholic Church in Godfrey and can be viewed live on the Gent Funeral Home Facebook page at 10:00 a.m. Friday, October 9, 2020. Burial will be held at St. Patrick’s Cemetery in Godfrey. Gent Funeral Home in Alton is in charge of arrangements. Online guestbook and information may be found at www.gentfuneralhome.com

The family of Edith L. Dorsey created this Life Tributes page to make it easy to share your memories.

Send flowers to the Dorsey family.