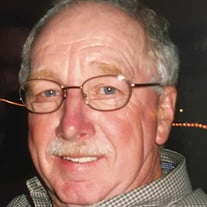 Earl W. Phillips, 81, of Godfrey, went to eternal life on February 13, 2022, at San Gabriel Memory Care in Godfrey. He was surrounded by his loving family. Born in Alton on July 11, 1940, he was the son of William J. and Myrtle F. Phillips of Alton and the tenth of their ten children. He spent a very successful multi-decade career at the Defense Mapping Agency in St. Louis and Washington, D.C. and served as a civilian in the Vietnam War. He was a 1982 graduate of the U.S. Army War College in Carlisle, PA. In 1993, President Bill Clinton presented him with the Department of Defense Agencies Meritorious Executive award. As part of his leisure activities during his working years, he enjoyed his long-time home on Culp Lane in Bethalto, playing basketball, and was an accomplished bowler, with four perfect games to his credit. He retired in 1996 and enjoyed time as a gentleman farmer with family, friends and cows at “Camp Earl Farm” in Belleview, IL. He also enjoyed golf, traveling and church activities, including singing in the choir at Calvary Baptist Church. His loving wife, Sue, who provided years of loving care during his battle with Parkinson’s disease and Lewy Body Dementia, survives him. Surviving also are his children: Jay (Mary) Phillips of Godfrey, and grandchildren Lucy and Riley; and Brad (Laurie) Phillips of St. Louis, and grandchildren Tommy, Danny and David; and stepdaughters Jenny (Greg) VanWyk and Betsy Maynard; and stepson Jeff (Kim) Maynard, and their son Jake (Maddie) and daughter Annie. Also surviving is his sister Bernice Haworth of Bethalto and his brother Richard (Ann) Phillips of Alton. Preceding him in death in addition to his parents, was his loving wife of over 40 years Marie Phillips, for whom he provided care during her battle with cancer. He is also preceded in death by his brothers William, Robert and Edwin Phillips, and sisters Katherine Sparks, Lucille Johnson, Rose Beem and Marjorie Colburn. Memorials may be made to the Alzheimer’s Association, the Michael J. Fox Foundation or a charity of your choice. A visitation will be held on Friday February 18, 2022 from 4:00-7:00 p.m. at Calvary Baptist Church, 1422 Washington Ave., Alton, IL where funeral services will be at 10:00 a.m. Saturday, February 19, 2022. Reverend Andre’ Dobson will officiate. Burial will follow at Rose Lawn Memorial Gardens in Bethalto. Gent Funeral Home in Alton is in charge of arrangements. Online guestbook and information may be found at www.gentfuneralhome.com

Earl W. Phillips, 81, of Godfrey, went to eternal life on February 13, 2022, at San Gabriel Memory Care in Godfrey. He was surrounded by his loving family. Born in Alton on July 11, 1940, he was the son of William J. and Myrtle F. Phillips of... View Obituary & Service Information

The family of Earl Walter Phillips created this Life Tributes page to make it easy to share your memories.

Send flowers to the Phillips family.